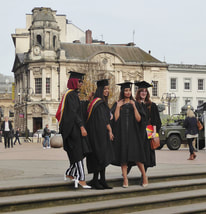 Choosing a university is one of the most important decisions that students will make. There is a large variation of opinions on how the system works; however, with no imminent prospect of a government prepared to get rid of fees, there is huge concern about the affordability of obtaining a degree. Those both inside and outside education are concerned as the future of the UK’s universities is overlooked in the chaos of Brexit negotiations. When it truly comes down to what matters, who will stand up for our education?

It's worth looking back at where the current situation started: on the 8 July 2015, Chancellor George Osborne announced that grants had become ‘unaffordable’ to the sustained growth of student capacity in universities. As a result, in September 2016, the maintenance grants were replaced with the more ‘desirable’ alternative of loans - at around £8,200. As we have progressed further into this decade, the cost of going to university has increased dramatically, with most fees as high as £9,250 a year. The combination of high fees and high living costs means that many students leave education with crushing debts of more than £50,000. While richer families may happily pay for their children to go, those less fortunate - but not poor enough to qualify for state aid - have to shoulder the burden of debt themselves. These financial pressures put increasing strain on young people, and critics argue that they are ‘deterred by debt’ and less likely to apply and invest in their higher education.

This isn't the only challenge currently facing UK universities. There are currently 46,000 EU nationals working in UK universities, who are forced to wonder about the security of their jobs. With employment varying from positions in scientific fields to the modern languages to catering, a poorly made decision or a lack of negotiation on this front could cause many problems. These decisions will have a huge impact upon the immigrants who have been settled for many years as well as the entire welfare of these institutions in the UK.

Some are already arguing that there aren’t even any benefits to a degree - especially with many new and beneficial apprenticeship schemes to choose from.

So why go and why risk the debt? A university education is arguably about more than just a degree and offers more lasting benefits than a certificate. For example, Luke Steele, a student at Leicester University, argues that his university experience has been ‘a great opportunity, I’ve never looked back’. He explains that university enabled him to 'meet new people, learn new things and even go to new places'. One of the highlights of his degree was a year in Barcelona which allowed him to grow ‘accustomed to a different culture’.

University is an expensive choice. What price can you put on your future?

Create your own unique website with customizable templates.
Photo used under Creative Commons from metrogogo
UA-121891675-1