Easter Sunday at the races 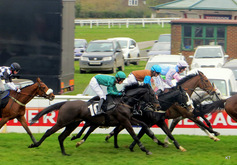 On Easter Sunday, Plumpton race course staged its richest race day in its 132 year history as there was close to £80,000 in prize money on offer over the seven races. The re-scheduled Sussex National was the main event which featured alongside the 2016 Sussex National Champion Hurdle. Sunshine and showers dominated the day, which provided many non-runners as only half of the competitors were able to race.

The opening race was a novice hurdle. Twelve months ago the winner, Ar Mad, went on to be a Grade 1 and 2 winner. This time Royal Vacation ploughed through the hail and the mud to become a well-deserved winner aided by the fact that the Cheltenham Gold Cup hopeful Cue Card had fallen over a week earlier at the festival.

The second race was a competitive handicap chase where Slidecheck jumped to perfection and justified the favouritism towards him. Like Sully made it as third favourite to go in but only just, with a thrilling finish up the home straight for the thousands of spectators, making the atmosphere very special despite the pouring rain. The 2016 Totepool Sussex Champion Hurdle attracted some decent horses, including last year’s winner, Dormello Mo who is owned by the celebrity Jeremy Kyle. However, there was no arguing the winner, the outsider Disputed, bolting up to win the £30,000 contest.

The Maiden Hurdle went to the fourth favourite of the day, Authorized Too. Despite 13 horses being scheduled to run only six competed resulting in quite a weak race. But all eyes were focused on the 2016 running of the At the Races Sussex National. Run over three and a half miles in gruelling conditions, it looked like an epic race to watch. Last year’s winner Itoldyou came back to win again to keep his title but could Gary and Josh Moore get the trophy back after winning it twice before with Reblis and Well Refreshed? The sun came out for the duration of the race. There were no fallers during the contest but many pulled up, with only half the field finishing. Top trainer and jockey, father and son combination of Nigel and Sam Twiston-Davies teamed up with Tour des Champs who breezed up and never looked in danger of losing his position throughout the race.

The final race of the day was a competitive handicap hurdle. Love’s Destination found his most loving destination which must be Plumpton, as he has won multiple times at the track. Not surprisingly he was the fifth favourite to go in.
So on a muddy day with great racing with big wins, trainer Chris Gordon got his horse Disputed in one of the features and Loves Destination in another. Tour des Champs proved to be the champion in the Sussex National but it was an overall fantastic day of racing. Not surprisingly Day 2 of the Easter Festival, which was due to be on Easter Monday, was abandoned as Storm Katie made it unfit for racing. Their one and only evening fixture is on the 22nd of April followed by Ladies Day on 8 May.

Create your own unique website with customizable templates.
Photo used under Creative Commons from Carine06
UA-121891675-1