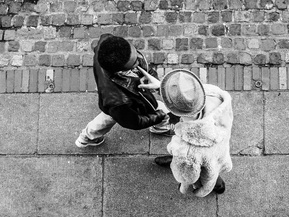 Since the EU referendum results in June racist attacks have increased dramatically. A growing number of racist confrontations have been reported across the country, not only on social media but there have been many cases of verbal assaults, discriminatory vandalism in public places and physical attacks. An 11-year-old girl was racially abused in Southwater Country Park near Horsham by a group of teenage boys just one day after the results of the referendum. Coincidence? I think not. You just need to search Facebook or Google to see the extent of this abuse.

What is clearly the worrying factor about the rapid outburst of racism is that it is happening in broad daylight where anyone who ‘doesn’t sound or look English’ is being told to ‘go home’. Police and local community leaders are appealing for calm in the wake of the leave vote and the Archbishop of Canterbury has spoken out against 'unacceptable' parts of the EU referendum campaign that encouraged racism and 'poison.' Many argue that Brexit has given racism a voice as many members of the Remain movement claim that the Leave campaign was rooted in hate and xenophobia. An example of this alleged racism is Nigel Farage’s anti-migrant poster that showed a queue of mostly non-white refugees and stated in big capital letters ‘Breaking point: the EU has failed us all. We must break free of the EU and take back control of our borders.’ No matter what side of the EU debate you are on, this image clearly provokes racial hatred. Many social media users quickly made the comparison between Farage’s poster and Nazi propaganda footage of the 1930s. MPs from many parties also commented on the image calling it ‘ utterly disgusting’ and ‘immoral.’

The two main issues at the top of voters' and politicians' agenda during the run up to the EU referendum were the economy and immigration. Green MP Caroline Lucas argues that migration is a ‘two–way street’ that we have the freedom to live, learn, study and work in 26 other countries if we stayed in the EU. She also argues that the people coming into our country are bringing benefits to not only our society and culture but also to our economy. In addition to this she publicly spoke out about many of the problems that people have with immigration as she argued that the ‘biggest suppressor of wages has been a global financial crash; services are under pressure predominantly because of vicious Government cutbacks.’ She also adds how the people not born here are scapegoats for the problems caused by our successive governments. What sort of world is it where the poorest blame other poor people for their hardships?

A large majority of people are worried about what will happen next as this country is entering an uncertain and sensitive time. But one thing that does need to change is the powerful and violent wave of racism. Hatred is never the solution, and within an already divided country, people need to put aside their differences and embrace the value of diversity and welcome those in need.