Human beings: destroyers of the Earth 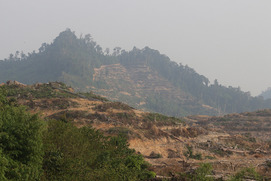 ​Do you like living on Planet Earth? Spending your time on it peacefully and happily with friends and family, living your life to the fullest? Then you should make the most of it. At this rate, I highly doubt that the planet will be habitable within the next few hundred years.

Let’s put it this way, looking at the work of Bill Bryson – A Short History of Nearly Everything, he theorised what it would be like if all the world’s current history be put into 24 valuable hours. 4.6 billion years into 24 hours that make up one minute days. Now, humans don’t come into the picture, until 11:58 pm. We have been on this planet for two single minutes, compared to the hours and hours of the Earth itself. We, as human beings are extremely modern species.

But it’s what has been accomplished within these two minutes that is the most outstanding. Within these two minutes, we have travelled to the moon, begun preparing for a mission to Mars, invented Twitter… Technological advancements have been extraordinary… but let’s not forget how we have mercilessly polluted the oceans and destroyed more than 50% of the world’s forests in the meantime. That’s right. The forests that supply our precious Earth with life-saving oxygen, our lifeline, and our lives depend on these beautiful and outstanding creations that we relentlessly destroy for our supplies every second. Every minute, more than three football fields of rainforest are obliterated. Every minute. These forests were once teeming with beautiful creatures. Gentle, innocent civilians of this world just as we are. It is estimated that more than 150 different species of animals go extinct every 24 hours, and the rate of extinction is far greater than that of Dinosaurs nearly 65 million years prior to this state. Why? Humans.

These sheets that I write on, the notes I take, the trips in the car, the holiday flights, the building on green space, the fuel that pollutes - these everyday things are the building blocks of our lives. But the wrecking ball to the world’s.

It’s not automatic apocalypse though. It’s important to remember that countries and individuals could make small steps towards saving the planet.
It is estimated that if the USA stopped using paper cups, over 60 million trees would be saved per year. What’s wrong with reusable, recyclable cups? We need to move away from being a throw-away culture to taking care of what we have.

Most of our race simply doesn’t appreciate the world we live in. Millions of people walk blindly around every day, thoughtlessly consuming precious resources while staring aimlessly into their phones, and gawping at social media updates and text messages.

Meanwhile the world is getting hotter, due to mass emissions of Greenhouse gases and other forms of pollution filling the air and producing smog blankets that smother London and other large cities across the world. It’s easy for us to ignore this reality living in the Sussex countryside, surrounded by agriculture and homely woodland rather than tower blocks and traffic jams, but we shouldn’t forget it. Global warming is producing increasingly bizarre and dangerous weather:  the melting of ice caps worsens every year, droughts, wild fires and storms have increased.

Let me go back: in two minutes, this is what we have done. Deprived the world of trees, wiped out millions of species, and then tried to pretend it wasn’t our problem. Suddenly the moon-landing in ’69 doesn’t seem so great after all, does it?

So what can you do to save the planet? Don’t join the throwaway culture; care about the planet you live on. Think about your actions.
Reduce. Re-use. Recycle.
​
Lauren Smith, Year 12
Powered by

Create your own unique website with customizable templates.
Photo used under Creative Commons from Wakx
UA-121891675-1