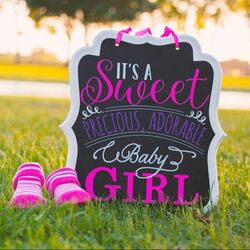 There’s a new Instagram-worthy trend on the block: gender reveals. Usually defined by either a pink or blue theme to indicate the sex of an unborn child, they’re a not-so-subtle representation of the sexist stereotypes that are prevalent in today’s society. Social media has played a key role in their popularisation: gender reveals are a fashionable new way for a couple to share the details of their pregnancy with the world. Oddly, they’re a product of both the modernity of the internet and outdated ideals.

Gender reveals rest on the assumption that a child’s character can be predefined by its sex (and that their sex and gender are one and the same). Before a baby has even taken its first breath, its personality has been predicted - or even decided - for it. With the excited squeals of ‘It’s a girl!’, or the blue banners proudly proclaiming that ‘We’re having a boy!’, come decades of preconceived notions about what it means to be a girl or a boy - because, from the moment they discover the sex of their child, parents are already planning what colour cot they’ll buy, and what clothes, and whether the baby mobile will have flowers and fairies or stars and spaceships.

Do we really live in such a binary society? Is everyone really so easily put into one of two categories - one of two stereotypes? It would seem not: while parents are excitedly announcing the gender of their children before they’ve left the womb, the next generation are pushing for a more genderfluid society. ‘Gender neutral’ is a term all-too-frequently greeted with eye rolls, but it is simply a suggestion that we should stop placing so much emphasis on gender. Some parents are embracing this attitude, and avoiding gender reveals in favour of gender neutral parenting. At one extreme, this can mean not revealing to a child its sex at all (which might, at the least, present logistical problems as the child got older); in a more moderate form, it means simply opting for non gendered toys and clothes, and perhaps gender neutral pronouns. Many people have been opting for a form of gender neutral parenting since before it had a name, but to others, it still seems a foreign concept. While the Kardashian family continue to use pink and blue as a means to define their children - lest they forget which are boys and which are girls, presumably - other celebrity parents, including Adele, Angelina Jolie, Will Smith, and Jennifer Lopez, are forging the way in gender neutral parenting.

Gender reveals are a modern take on a centuries-old notion: that who a child will grow up to be is defined by their biological sex. Many believe that women can make good doctors and physicists, and that men can make good nurses and teachers - but the conviction that a person’s gender defines their personality still persists. However, children are exposed so heavily to gender norms that they still have a notable impact. For example, in 2018 only 22.2% of students taking Physics A-level were girls - and yet, on average, female students performed better than their male counterparts. This suggests that though women are equally as competent as men, fewer believe themselves to be; perhaps this is as a result of resolute gender stereotypes.

Society is split in half. People are considered to fit into one of two rigid definitions: male or female, man or woman, boy or girl. Do we really live in a world that is so black and white? Or, should I say, pink and blue?