Flying the Skywire for charity: a once-in-a-lifetime experience 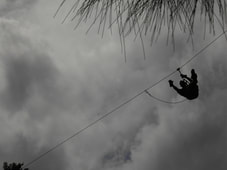 The Skywire, in Cornwall, is the longest and fastest zip wire in England. It reaches speeds of over 60 miles an hour, and measures 660 metres long. Soaring over the Eden Project, the participant is suspended face-down, 100 metres above ground! Far above the canopy of trees, this adrenaline-fuelled adventure only lasts 45 seconds due to the rocketing speed that you travel at. This is the closest you can get to flying!

Why did I do this?
When I was seven years old, my Grandma died of leukaemia. She had been in hospital for two years, but eventually lost the fight to cancer. This year was the sixth anniversary of her death and, as I was unable to do a charity event last year due to injury, I felt it was appropriate to do something out of my comfort zone and challenge myself to commemorate the occasion. Previously, I have done a 10k fun run and swum a mile; all the money I raise goes to the Pevensey Ward, Eastbourne Hospital. I do these event to show my thanks and appreciation to the people on this ward who helped my grandma so much, and because the money that I fundraise goes towards new equipment and helps people who are suffering from cancer.

My experience of the Skywire
As a member of staff secured me in a huge, heavy harness, I felt shivers running up and down my spine with excitement and nerves. Then there was the wait… After what felt like decades, I was finally transported by a mini bus to the beginning of the wire. Having climbed up the largest quantity of stairs in my life, I was at the top of the drop. I stepped into a wooden platform and had to bend down into a press up position. While I was secured onto the wire, I looked down - which was a mistake! I was incredibly high-up, and at this point the only thing which was going to make me do this zip wire was the cause I was doing it for. My heartbeat was so loud it was as if drums were pounding inside of my body. Adrenaline bubbled up inside me. I barely heard the countdown as I was so shocked and anxious. Suddenly I was off, and all of my adrenaline was erupting out of me in screams and shouts! A short 45 seconds later I was back on the ground. I felt dizzy with excitement but I was so proud of myself for doing this event. My goal was to raise £100 for my charity. I have raised £180. ! Thank you to everyone who supported me.