Literally making a fuss about nothing 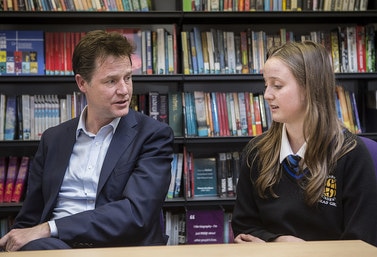 When Nick Clegg used the word ‘literally’ in a now linguistically infamous interview with the Daily Telegraph, he probably thought he was going to be attacked by the left for his politics, or attacked by the right for his politics, not by a group of wizened men with monocles for using a word ‘incorrectly’. The poor man can’t seem to do anything right. But the thing is, the criticism he’s getting this time is completely unwarranted. Yes, he used ‘literally’ in a way unfitting for the deputy PM, and I should hope he’s sorry. However, to say he used it ‘wrong’ would in itself be linguistically ignorant.

‘Literally’s meaning has literally evolved over time to become something quite different. It isn’t the only word to undergo change. For example: ‘like’, which once would have been used to say “I like the deputy Prime Minister”, but now would be used to say “he’s, like, a total idiot”, has been shaped by vernacular culture and undergone semantic widening, gaining meanings as it is used. And what’s wrong with that? Language needs to be used in order for it to mean anything, and if that’s how people want to use ‘literally’, then they literally should.

This view isn’t shared, unsurprisingly, by the Telegraph, who wrote a quick article as if to apologise for even featuring such an abominable use of language in their newspaper, arguing that if the word ‘literally’ stops literally meaning literally, in its literal original sense, there would be nothing to replace it with. Well, fair enough. There is no other word to mean what ‘literally’ means. But why should it stop meaning its original meaning? Can’t it mean two things at once? English speakers grapple with far more complex concepts.

This viewpoint is almost prescriptivist; that is, a belief that language shouldn’t change and that change erodes its meaning. However, the writer and comedian the Telegraph quotes, as evidently they couldn’t find any real linguists, does conclude that English is a “floral language”, and one that can be descriptive and not-literal. Clearly there’s good and bad, literally, in all of us.

Or maybe not. In an angry article in the Guardian, John Sutherland despaired at the inclusion of the new meaning of ‘literally’ in the Oxford English Dictionary, despite the fact that ‘literally’ is literally a word in use, and the OED does God’s work by recording them all. The OED is great. Every story ever written is in the dictionary, you just have to put the words in the right order. Sutherland argues that literacy is being ruined (literally?) by words being overused. ‘Robust’, he screams in rage, is being used for things which can’t literally be robust, such as a plan or a policy. Politicians, according to him, are the “inveterate trashers of language”, despite the fact that I don’t exactly see Jacob Rees Mogg using English in anything other than its 18th century form.

His furious article does an excellent job of showing the closed-mindedness of those who subscribe to the ‘damp spoon’ theory of language change. This is the theory that language is degraded through the laziness of its speakers; if people use language in a non-standard way, it bleeds into the ‘proper’ language of those who use it ‘correctly’ and it becomes all mushy. Ridiculous! Isn’t language, quite literally, the words used by people, and the meanings they put behind those words? Language is what its speakers make of it.

Perhaps worse is the ‘crumbling castle’ theory. This sees language as a perfect castle which is being slowly chipped away at by people using language differently. There are several problems with this theory, the most obvious of which was highlighted in a recent lecture by the linguist Jean Aitchison; how do you determine the point at which the castle was perfect? Language has always been changing and evolving; there are words which were used in the 16th century which were not by the 18th. As the writer of the first dictionary put it: “As some words are budding, others are falling away.”

And yet despite linguists such as Aitchison and David Crystal - and even the father of the modern dictionary - all agreeing that language is a living, breathing thing which only stays alive through evolution, the John Humphrys’ and John Sutherlands of this world still feel the need to keep language in a small cage in the dark, beating it back with a stick when it gets too inquisitive. Not literally, of course. That would be abuse.

Disclaimer!: I wrote this for an exam, arguing the easier side of the debate. This is not what I personally think. I think Nick Clegg is a good man who tried his best, I rarely use ‘like’, and am not particularly descriptivist. Anyone can argue a viewpoint for a particular audience; they don’t have to believe in what they’re saying. Every time I read the Daily Mail I try to remember this.