The brilliance of Beyoncé

"I'm over being a pop star. I don't wanna be a hot girl. I wanna be iconic." Beyoncé 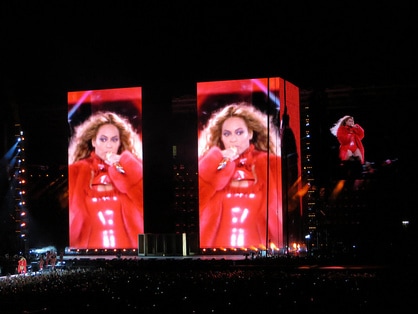 Whether or not you like her music, you know Beyoncé.
​
The international singing superstar once said that “power is not given to you. You have to take it.” And in the twenty years since she started her career, she has done just that. She has taken the power that she desires, and she has done nothing but good.

“Destiny’s Child formed in 1990. When it rose to popularity in 1997 was the first we had seen of Beyoncé Knowles. Singing and dancing with Kelly Rowland and Michelle Williams, she made her way into the public eye, nothing more than the most popular member of a popular girl band.
Its hiatus saw Beyoncé first prove herself as something more than our expectations. Instead of just one of three, she demonstrated style and skill and talent with Dangerously in Love.

Beyoncé started out as your run-of-the-mill girl band member. Yes, she was vocally and physically flawless, but there was nothing tangibly influential about her. When Dangerously in Love came along, we learnt that she was good as a soloist as well. And, yeah, Crazy in Love was a jam, but it wasn’t changing the way of the world.

And so her success continued. Her music, catchy and soulful and heartfelt, wormed its way in to popular culture and in to our cultural psyche. Her marriage to Jay Z propelled her in to pop royalty, and she made waves with her film performances, she became known as the queen of pop, idolised by boys and girls around the world.  Everyone knew her name.
But now we know her for more than that.
The self-titled album Beyoncé dropped on December 13th 2013.
***Flawless epitomises the influence of this once girl band member, and the influence of this ground-breaking album.  Nigerian author Chimimanda Ngozie Adichie guests on the track. This is where Beyoncé started to show her true power.

“We teach girls to shrink themselves, to make themselves smaller…we teach girls that they cannot be sexual beings in the way that boys are. Feminist: the person who believes in the social, political and economic equality of the sexes”

Beyoncé used the exposure and publicity that she had gained as Ms Carter, as Sasha Fierce, and used it to spread a message to millions. A message of equality and the power of women, yes, something she had already hinted at with Run the World (Girls)- but this message was explicit.
This message says that Feminism is the future. The future is female.

How many millions of young girls have heard this song? How many women and girls have learnt that they are allowed to be sexual, boisterous, angry, in the way that boys are? How many girls and women of colour who previously felt worthless, ugly, wrong, now see this pillar of respect and talent praising them, raising them up. It was ground-breaking. It was a revolution within the music industry.

And then Lemonade happened.

Where she ceased to give any care for those around her. The raw emotional and political message of the album is something that haunts me in the best possible way. It attacks white privilege, misogyny, and the disrespect of women by men and did it in the most beautiful and unyielding way. It raises up people of colour, groups which often do not have a voice in society. She raises them up, makes them acknowledge the beauty in their culture and complexion, it makes them acknowledge their unity in a way they had never seen reflected in the media. I glorifies the things about them that society,. For too long, has deemed ugly.

“I like my baby heir with baby hair and afros. I like my negro nose with Jackson Five nostrils”

Lemonade is a work of visual and audio art. Art with a message of rebellion against subservience, a message of feminism. A message of fighting back.
It takes the message of Beyoncé and cranks it up to 11.
You want more proof? The Grammy’s 2017. The Lemonade medley performance. The moment Beyoncé said, ‘here I am. Pregnant and black and beautiful and worthy of your praise’ Beyoncé, a self-proclaimed goddess in gold, pregnant with twins and still showing us her beauty, her power, her refusal to stop when everyone else has.

All of this, all of this fight and inspiration and expression of power, spoken by a woman who was once just a young girl from Houston, Texas. A girl- no, a woman, who played the game and made everyone who ever doubted her look up and watch as she slayed them.

Beyoncé found herself in a misogynistic and limiting industry. One which takes advantage of female talent. Beyoncé, a young woman of colour, forged her own path with Dangerously in Love. She made us trust her, love her, look up to her. She said ‘screw that’ to being another meaningless and vapid pop star, she has become so much more than an artist.
​
She’s drawn the support of other artists- most notably that of Adele, causing arguably the most popular British Artist to call out the blatant white favouritism of the Grammys, to stand on a stage and proclaim the inspiration and influence of Ms Knowles; to say “what the **** does Beyoncé have to do to win Album of the Year?”
Name one other artist who has this kind of influence, in to society, in to the music industry, in to the world.
I don’t think you can.
Her influence and her image and her message have transcended music.
Beyoncé is a message of independence and self-belief, of unadulterated talent and bravery, of love and of respect and forgiveness. She has taken the best parts of herself and given them to us.
Beyoncé is not trying to change the world.
I think she already has.

Create your own unique website with customizable templates.
Photo used under Creative Commons from amsfrank
UA-121891675-1