Teenagers and consent: saying NO 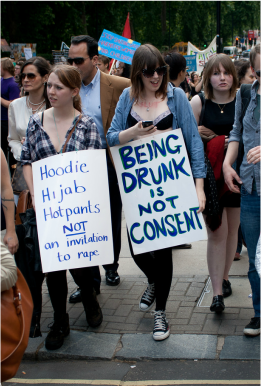 As a community of well-educated individuals, you would have thought we are more than aware of the necessity of consent. We all understand if someone says ‘no’, they mean ‘no’; it’s nothing more than basic knowledge, right? So why is it that as soon as some people enter a party environment, all morals and values seem to disappear? What I mean by this is isn’t just the fact that some individuals deem it acceptable to tear out plants by the roots and smash half-filled bottles on the floor after they arrive to a brave soul’s house and enter the party. Of course this would be otherwise completely inappropriate behaviour but for some reason as soon as an opportunity to behave less than civil occurs, people seem to take it and run. And when I say run, I mean sprint.

Anti-social behaviour is worrying enough, but there is unfortunately a much worse problem that happens far too often in a party situation. Over the past few years of attending house parties, it has quickly become clear that these parties are not thrown for people to simply socialise and have fun; they are thrown with the intent of ‘getting with someone’. On its own, perhaps there is nothing wrong with this; I mean who am I to stand in the way of two people enjoying their youth. The problem occurs when it’s just the one person who's enjoying it.

According to the English dictionary, the definition of consent is ‘permission for something to happen or agreement to do something.’ In theory, everyone is aware of the importance of consent, so why do people still choose to ignore it? Just because a girl may be under the influence, does this mean she automatically gives consent for a male (or female for that matter- however far more unlikely) to do whatever their heart desires? Of course not; however this doesn’t explain why 51% of sexual assaults are accounted by teenagers or why 23% of all sexual offenders are under the age of 18. These statistics are far too high and far too worrying to be ignored. Call me sexist but I fully believe the main reason these statistics are so actively ignored stems from the idea that males sstill struggle to admit that their gender is the source of such a huge problem. It's from boys and men that you hear the highly pathetic, laughable excuses. From ‘her skirt was too short’ to ‘she was asking for it’ or even ‘she was enjoying it at first’; there is no excuse on earth that that can justify sexual assault.

The issue isn’t as straightforward as someone simply going against your wishes for an evening. Quite frankly, the only thing you have full control over in this world is yourself and your body and when someone takes that control away from you, it’s scary. More than scary, it’s petrifying. And sadly, that’s not the worst part about it. The psychological damage it can leave people for many years just for the sake of a selfish individual's enjoyment is extremely disturbing. The effect of sexual assault includes anxiety, depression, PTSD and even suicidal thoughts. Of course, these are rather extreme examples however they are never the less very real examples.

Sexual harassment of any kind and any measure- whether it’s physical or verbal is disgusting and should not be tolerated. This is why consent is so important. Many teenagers don’t feel comfortable saying no for fear that word will get around that god forbid, they’re ‘frigid’. What people may fail to understand is that girls are called frigid because boys don’t like to admit a girl has turned them down and so it must be all her fault. Hm. What I’m saying is that you shouldn’t be afraid to say no. It’s your right as a female and as a human being.

I know it’s a simple message and one that everyone already knows however it gets brushed off far too easily and, in the moment, some even forget that it is okay to say no. It is okay. It is your right.

By Olivia Gillbanks, Y12
Powered by

Create your own unique website with customizable templates.
Photo used under Creative Commons from rogamuffin
UA-121891675-1