Five reasons why Budapest is the best 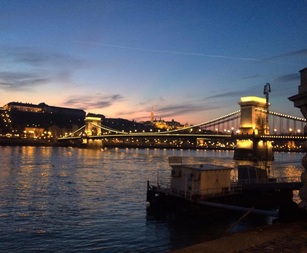 Now, when I was told by my mother that the capital of Hungary was the destination for my February half term holiday, I was annoyed. February half term is a time to relax and experience some respite from the endless assault of homework and exams, and just chill a little (and by chill I mean play video games and feel jealous of the kids going on the school skiing holidays). The short stay getaways my mother books are not an opportunity to chill. They involve getting up at the crack of dawn to walk 10 miles a day across a city I have no knowledge of, surrounded by people speaking a language of which I do not know a single word. Budapest, however, was an exception to this rule. Within hours of landing at Ferenc Liszt national airport, I was aware that I was in a city like no other: this was going to be a holiday that would change my preconceptions of European travel.

Budapest is definitely an eye pleaser. In some ways, Budapest is not a pretty city, it still holds remnants of its communist past, in the form of Soviet style tower blocks, and Spartan, functional buildings. But this just makes it more fascinating and altogether more beautiful. The other element of Budapest’s architecture is ornate Victorian era buildings, gilt with gold and Renaissance style frescos that would make Michelangelo envious. The small cobbled squares surrounded by good restaurants and the buzz of cosmopolitan life makes the Soviet past more poignant, as you are constantly reminded of how far this country has come, how it has grown into its beauty to be a place where the arts and expression are cherished, without forgetting its past.

The food is very, very good. The only way I can describe Hungarian food is that it makes you feel like you can fight capitalism. Trust me, confit of goose leg with red cabbage and mashed potato is a meal that would keep you warm in even the coldest winter. Hungarians also love cake- one thing I learned at every restaurant I went to, including the famous New York Café at the Boscolo Hotel. The dining room had a live pianist on a beautiful grand piano, and an amazing ceiling covered with gold leaf and century-old biblical frescoes. Even after the decadent room, the choice of traditional and modern confectionary was incredibly diverse. One of the items on the menu was the sachertorte, a rich chocolate cake which is accented with basil leaves and apricot jam. Every restaurant I went to, no matter the cuisine, had cake. Russian, Modern Hungarian, traditional Hungarian, French, no matter the origin of the food, there was always a good cake to finish off the meal, and for that I am truly thankful.

If you don’t want to spend money, you really don’t have to. Although it is a member of the European Union, Hungary uses its own currency instead of the euro. This is where Budapest finds its greatest strength in the eyes of a traveller- the exchange rate is so in favour of the pound that you can buy a pizza, three beers and a burger for under £10. That’s value for money my friends, and it allows you to spend as much as you want on cake.

Culture is King in this city. You can’t go 50 feet in Budapest without coming upon a theatre, bookshop, gallery or museum. In recent years the city has become a hub of European arts and culture, making it the perfect place for checking out shows, or experiencing the classic and modern arts. One of my favourite memories of Budapest is walking back from a particularly delicious meal to find a large, gypsy style cart, piled high with books and covered up from the rain. People could easily come up and buy a book for the equivalent of less than 30p. It’s this kind of thing, this way that Hungarians treasure their history and culture in a way I have seen no other people do, that was so refreshing and surprising for me.

It’s not your average tourist destination. Yes, Budapest has your typical bus tours and tourist traps, but the real attractions are the authentic pieces of Hungarian life. The Great Market Hall is an example of this. Imagine Kings Cross Station, only older looking and piled with fresh fruit and vegetables, cured meats, and street food. It’s an experience for all of the senses, and it’s where many of the inhabitants of the city come to buy their food and to interact with each other. It’s a great introduction to the vibrancy of Hungarian culture, and when you have experienced the Roman baths and historic citadel- you get a taste of what Budapest is really like.
​
I loved Budapest. It’s a city like no other, one that is an amalgam of dark and tumultuous history, beautiful architecture with a thriving art culture. The food is good; the people are friendly and cake is always on the menu. Where can you go wrong? You can’t, and that’s the truth. Budapest is the place to be.