The glories of a second-hand Christmas 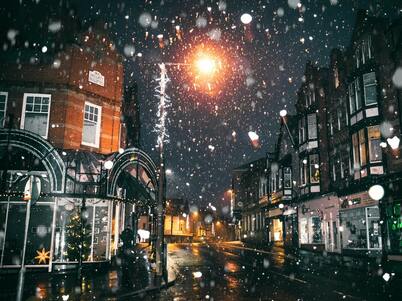 Now that we are getting into the festive season of gift giving, it is more important than ever that we make both sensible and sustainable gift choices. Sure, you want your friend to have the best gift possible, but is it really necessary to ruin the environment while doing so? Of course not! This is where charity shops come in. Charity shops are a great way to find amazing gifts but at a cheaper price. As well as this, charity shopping means individuals are able to avoid over-consumption and contribution to landfill whilst giving their money to worthwhile charities. Could there be anything better than that?

Every year, millions of people receive Christmas presents which they quite frankly would rather not have. According to a survey conducted by finder.com of 2,009 British adults, it is estimated that over 21 million (50.77%) people receive at least one unwanted gift each Christmas. On average, those who have received undesired gifts have received three! This is excessive and it needs to stop. Following the survey, it was discovered that 6.13% of gift receivers ended up throwing their unwanted gifts away. This results in huge environmental impacts such as increased landfill waste, where waste is simply shovelled into huge pits, not designed to break down waste, only store it. This results in increased levels of pollution formed by the liquid leachate which is created when waste breaks down in the landfill and water filters through the waste. This liquid is highly toxic and can pollute land, ground water and water ways further, contributing to the decline of the environment.

One solution to this issue is charity shops; they allow individuals to donate items which they no longer want/need. Donations are processed in the store’s backroom, emptied onto a sorting table and are quality controlled and checked. On average only 5% of clothing donated to charity shops is discarded as waste. Textiles that cannot be sold are sold to textile recyclers: these items will either be recycled as fabric or exported for garments overseas. Once donations have been approved, the majority of items are steamed. Some shops also have a washing machine in the backroom. In some cases, volunteers take the goods home in order to clean them.

On average, £41.70 is being spent per person on unwanted presents which estimates out to be about £5.03 billion that’s going down the drain - yet another reason why we should be considering alternative buying methods. However, with cheap clothing and accessories being readily available on the high streets, it is incredibly easy to gravitate towards the fast fashion retail stores, with their mass production levels and poor working conditions.

On average, globally, a staggering 10,000 items of clothing are being sent to landfills every five minutes. Alongside this overwhelming statistic, vast amounts of raw materials are being used to produce these items which are going to be wasted. For example, in order to make a pair of jeans it takes an astounding 1800 gallons of water.

You may be surprised to realise that charity shops are even cheaper than fast fashion retailers, filled with high quality goods – not just clothes! Charity shops also sell books, CDs, vinyls, china and accessories; the gift giving possibilities are endless!

For example, I recently came across a pair of Calvin Klein canvas shoes in a local charity shop for £25 with a retail price of £86. These shoes were in sparkling condition and they would have been a great steal for a shoe-obsessed friend! There has also been research into the carbon footprint impact of clothing, discovering that wearing something for an extra nine months can reduce an item's carbon footprint by 20-30%.

Moving on from clothes, most charity shops sell books from anywhere between £0.50-£1. These books are usually in amazing condition and are considerably cheaper than the standard rate of £9. Many charity shops also do book deals (e.g. five books for £4) which is an amazing option for all your book-loving friends out there! Opting for a used book results in less than one fifth of carbon emissions and you are making the responsible choice to actively prevent the same books going to landfill.

If you’re still anxious or unable to leave your house, many charity shops offer online selling services. This method of selling is used predominantly for collectibles, such as records or china, however, other online sales outlet users can also sell items on behalf of their chosen charity. There really is no excuse to not shop smart!

Most importantly, by charity shopping, you are helping a charity to prosper and thrive. If you are to buy gifts from charity shops, you are supporting a charity and ensuring that those who need it receive the vital help that they require. Isn’t that amazing?

Charity shops are amazing hidden gems, and it's fantastic that they are starting to get the recognition which they so desperately deserve. This festive season, it's time to shop smart and take a second to consider: “Would this person really want what I’m getting them?” If not, then it’s time to make another choice.