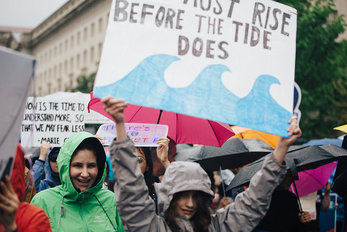 With crucial events going on such as ‘Great British Bake Off’ moving to ‘Channel 4’, Harry Styles having a new album out and Liam Payne having a child, it’s easy to overlook the insignificant points. The minor matters like global warming. The minor matters that could destroy most life on our planet and turn our precious world into an overheated, apocalyptic abyss.

If global warming persists; it will murder millions. Woah, but hang on a minute, I heard “the concept of global warming was created by and for the Chinese in order to make U.S. manufacturing non-competitive.” No. No, Donald. No, it wasn’t. It’s a real thing that is massively harming our planet!

This effect keeps the Earth at a temperature that can sustain human life and without it, the Earth would be approximately 33 degrees colder than it is now and to put things into perspective, the last ice age was only a couple degrees colder, so 33 degrees colder would be unbearable. So, it’s a beneficial thing… until we reckless humans that ‘rule’ Earth come along, pump the atmosphere with extra man-made greenhouse gases and enhance the effect, to further warm the planet.

We do this by polluting the planet through industry and agriculture and increasing the amount of greenhouse gases that are in the atmosphere. This then warms the planet more because less heat is escaping and causes global warming, which in simple terms is Earth warming up.

If we continue to cause global warming then it’s likely that there will be more heat waves that will cause more deaths; crops will need more water; costs of flooding damage will rise to 2.1 billion by the 2080s; wildlife such as polar bears will decline due to habitat loss; coral reefs could see biodiversity lost; warmer water will cause coral bleaching, higher sea levels will cause more flooding - including the loss of many low-lying islands currently inhabited by humans and other species. So, only a minor matter. If the adults and the politicans won't face up to it, it will be up to our generation to make the changes.

To begin to do your bit, you can plant more trees and plants, burn less fossil fuels and wood. You can drive less; walk more, get more energy efficient appliances, use less hot water, put on a jumper instead of turning up the heating. You can turn off appliances not being used, install solar panels, buy products with less packaging or with recyclable packing, waste less and recycle more. Make sure less goes to landfill, get a smart meter so you can track your power usage, use as little electricity as possible and just do what you can to end global warming. And maybe think about a career that helps make a difference.

There is so much you can do, so simply, and there’s no reason not to, oh except that ‘Bake off’ is moving to ‘Channel 4’ and you've got another box set to watch. Priorities matter.

Create your own unique website with customizable templates.
Photo used under Creative Commons from mollyktadams
UA-121891675-1