A label-free society: the next brick in the road to equality? 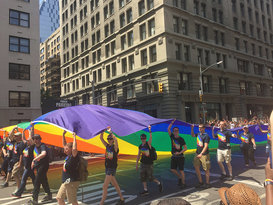 In 2016, just over 1 million (2.0%) of the UK population aged 16 and over identified themselves as lesbian, gay or bisexual, according to results published by the Office for National Statistics. That leaves us at first to assume that the remaining 98% of the population categorise themselves as heterosexual. However, in recent years, a vast spectrum of categories has emerged, with several sexual orientation terms now being used. These include queer, pansexual, asexual, aromantic and bicurious - just to name a few. Public acceptance and support for both these terms and those who adhere to them signifies just how far the UK has come in accepting varied sexual orientations since the Sexual Offences Act of 1967, which decriminalised homosexuality. However, for some, the ‘accommodating’ spectrum is far from accommodating, and can actually be viewed as restrictive. Consequently, this leaves people feeling as if they must fit into a category, and keep to a certain label with little fluidity between their sexual orientation other than what their label permits.

Society loves to give labels: it gives us a sense of order, structure and control. Yet, for some things, labelling and classification can cause rigidity, especially in the context of sexual orientation, in which our sexual preferences can change throughout our lives at any given point, and are not necessarily permanent. This fluid nature makes it hard to live whatever lifestyle you choose, if in doing so you have to label yourself and adhere to the typical nature - or even stereotype - of someone in that category. This can ultimately cause psychological restriction, as people feel they cannot interchange between labels in order to keep up with the variability of their sexual orientation. They instead stick to one, possibly causing unhappiness and feelings of constraint. Consequently, there can be a negative effect on mental health.

A simple way to solve this issue would be to choose not to live by a specific sexual orientation label. By liberating yourself from the arguably constraining categorical spectrum, you will not be hindered from meeting and forming an intimate connection with someone whom you otherwise may not have. A society wherein labels are no longer used would grant emotional freedom and would give the liberation of many when it comes to their sexual attraction.

For many of us, young people especially, the act of ‘coming out’ can be a daunting one and can cause a lot of psychological stress. The only way to tackle this issue is by people realising that there is no need to adhere to the gratuitous societal expectation to ‘come out’ and announce to the world what gender you are or are not attracted to. For many, putting a label to this would be complicated, only causing more distress. There is no need to define when it comes to something with such a fluid nature. Instead of making people feel as if they should ‘figure themselves out’, society should be encouraging what seems natural and not letting one or two or three restrictive words define us. In the words of Darren Criss, ‘people fall in love with a person, not a gender’.
​
Georgina Sharma, Year 12
Powered by

Create your own unique website with customizable templates.
Photo used under Creative Commons from Cait_Stewart
UA-121891675-1