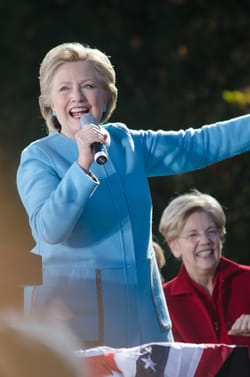 On 9 November 2016 I woke up early, glanced at the BBC website, screamed a bit, and punched a wall, roughly in that order.
Now, the disbelief has faded a little and the realism is kicking in. People are asking ‘why?’, ‘how?’, and ‘what now?’ and, truth be told, no one really knows for sure. Was it a vote for something crazy just to see what happens? Was it truly that people thought Hillary Clinton should be locked up? Was it a vote against the establishment? Was it even just plain old sexism?

When Hillary Clinton appeared, drained and make-up free in her first appearance since her concession speech, she asked people to move on, to forget but keep fighting. Her bravery in the face of the most crushing defeat was admirable. Why she lost became even more of a mystery as she stood in front of the nation and told people not to give up.

President isn’t really a job you can be overqualified for, but Hillary Clinton was overqualified. Ex-first lady; ex-senator for New York, on 9/11, might I add; ex-secretary of state. Her resume, which she was increasingly fond of reciting, showed decades of public service. Having a good cause is the almost compulsory territory of the first lady, with Melania Trump already developing an –ironic– anti-bullying rhetoric, but Hillary Clinton fought for women’s rights and minority rights throughout her time as First Lady, and then beyond.

Perhaps that was part of her problem. She campaigned as Madame President, the feminist icon showing that women can achieve whatever they want if they fight for it. To many young people, she was the shifty ‘white feminist’ which they post about disparagingly on Tumblr, sandwiched between aesthetic pictures of leaves and gifs of frogs on unicycles. What is wrong with being white and a feminist is beyond me. But then I would have voted for Hillary Clinton even if the other options were Bernie Sanders and a huge pink dog with the words ‘girl power’ on a sign around its neck.

Many young people didn’t swallow their pride and vote for her, citing her somewhat sketchy record on gay rights and affirmative action. As with all politicians, if you sift through enough old interview tapes, you’ll find a time when their views didn’t align with their views now. Clinton didn’t always support gay marriage. But neither did Obama or Sanders, and many young people seemed to forget that when writing in #BERNIESANDERS on their now-wasted ballots.

Obama’s two successful presidential elections highlight some of Clinton’s mistakes. He didn’t campaign as the first black president, but as a progressive president, the voice of millions of Americans regardless of race. Obama always seemed half-hearted about mentioning his race in the context of the presidency. He only stepped into the role of ‘black president’ when tensions arose in the black church and it was deemed ‘un-American’. With Hillary Clinton, you sometimes got the feeling that she would reroof the White House with glass just to have the pleasure of smashing it.

Clinton was the ultimate experienced Washington insider. In a world of pure, clean logic she would be president-elect with all 538 electoral college votes locked up in an unheard-of victory, but this election was a vote for all the things that Washington hasn’t represented for years: jobs for the unemployed and uneducated, an end to globalisation, fear of people who are different, a voice for those whose views haven’t been accepted in tolerant society for decades. Hillary Clinton was the sensible candidate in an election which wasn’t about making the sensible choice; it was about shaking up the status quo.
In the same way that Brexit wasn’t really about the EU, the presidential election wasn’t really about who wanted to president. Both votes were about fear, about a growing nationalism and patriotism in the white working and middle classes who say they are being ignored by the so-called ‘liberal elite’ and who fear they are seeing society change around them. This was shown by the woeful lack of policy discussion in debates, with instead a disproportionally large amount of time being spent on Clinton’s emails.

Did those emails lose her the election? It’s hard to say. The FBI director announcing a new investigation just 11 days before the election and then revealing that there was nothing of significance and there would be no new charges should have had little effect. Without a doubt it was shady; it is in fact illegal for officials to attempt to influence the outcome of elections, but the impact it had was indirect. It reminded people who were supporting Clinton half-heartedly, as the ‘lesser of two evils’, that she was the epitome of establishment, that she had been in government before and that she had done nothing to help the poorest of the poor then, and that she knew the Washington machine and how to play it. In the election of the outsider, this was not a good thing. People decided to vote for Trump instead, and to kick the establishment out of power.

Throughout the campaign she was criticised for being too robotic, having no personality, sounding scripted, being ‘over prepared’. There was a stark contrast between Clinton’s polished performances and Trump’s ad-libbing, repetitive, and yet somehow authentic style. While Hillary prepared for debates with the concentration of a “top lawyer preparing for an important case”, the Donald was playing golf.
This isn’t what people want in politics anymore. Politics isn’t about policies or plans, experience or education. Not these days. People want someone to show them the answer to all of their problems, they want a saviour, they want a demagogue, they want ‘us and them’, they want something to blame. Most of all they want change.

It’s ironic really. The same people who see a face of a different colour to their own and simply must rush to post about it on Facebook in angry capitals want a seismic reshuffle at the very top of society.
But the very top of society is where the best and brightest of us exist, although it may not seem like it at times. While the gutter-press grovel and tell us that we’re being cheated out of jobs, money, even life, and that difference is bad, Hillary Clinton and others like her are passing laws that enable us to live better lives than those who came before us. Last year, five unelected Justices on the US Supreme Court ruled that gay marriage is constitutional and ordered marriage bans overturned. In 2010 the Obama administration provided to Americans what has been available on this craggy island since the sixties; universal healthcare. One Democratic Congresswoman was shot for it. On this side of the Atlantic, 1998 saw the Human Rights Act written into law by a Prime Minister who would later become one of the most hated.

If Hillary Clinton’s emails proved to be her downfall, they also revealed something else about her, which didn’t make the headlines.

She has her faults; to send emails from a private server was a mistake. But within the emails sent to diplomats and aides, to officials and charities, there were glimpses of a person who we never saw on the campaign trail. Her nicknames for Mitt Romney and Newt Gingrich were ‘mittens’ and ‘the Grinch’, she often had issues with office supplies being mislaid, and on the night of the Benghazi attacks in 2012 the first person she emailed was her daughter.

I hope she signed them off as:
Hillary Rodham Clinton- the best president there never was.