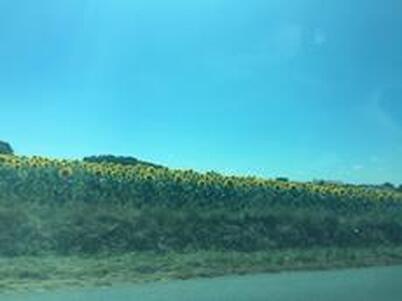 A lake is the last thing we expect to find as we trudge through field after field of sunflowers. Hidden from the road by this rolling yellow carpet, we are all gasping in amazement to find it. Concealed from the traffic, this feels a million miles away from any form of human interaction. The lake glistens in the early morning sun, the still, chromatic blue stands out against the jade-green trees that surround it. Dull-looking rocks, covered in sage green moss form enticing pools, full of deep, clear water, luring me in, calling for me to plunge into the water below. Clambering over the rocks, racing my brothers to get to the top of the cave standing above the lake. Breaking up the lake, creating large pools of water which are perfect to throw myself into. My feet are slipping on the moss below as I take two steps forward but one step back. But none of this matters, the sheer thought of being able to land in that cool, translucent blue water below is enough of a spur to keep climbing until I reach the top of the cave.

Looking down, my legs begin to shake, although only six foot off the floor, my heart pounding as my body fills itself with adrenaline at the thought of throwing myself overboard. I leap into the water, shaming my nerves into submission as everyone encourages me from below, shrieking as I hit the freezing, yet refreshing water below. However, I can’t wipe the smile off my face as I join the rest of my family who are already splashing about in the water, laughing away without a care in the world. After ungracefully clambering out of the lake, I lie on the rocks, taking in the glorious late-July heat, taking only an instant to dry. But the water is hard to resist. The way it twinkles in the sunlight, blinding you with its reflection. The mumble of laugher below is luring me back in, I stand up, legs still shaking, but this time with adrenaline, smiling as I take the plunge, landing in the water below, splashing and laughing away without a care in the world.

This is south west France. A place best known for its tranquil villages and its relaxed way of life. Its warm, sun-kissed weather draws tourists in. We have been staying in Mallenville - a tiny place with typical French architecture, exposed stone walls, light blue shutters framing the windows and flowers adorning balconies. All of that contrasts starkly with the dark green of the trees and the transparency of the water below. It is hard to believe all of this is in the same tiny village, only separated by the rolling fields and tree cover above.

The water is magical. Like nothing I have ever seen before, how can fresh water be so pure? I don’t want to leave, I am at peace here and I like that. After being forced out of the water by the lure of a freshly made picnic on top of the cave, I join my family and tuck into the picnic. There is so much glorious food on offer! I am bombarded with the freshest and finest French food. Freshly baked croissants, this morning’s perfectly golden French stick, bottle green olives, an extensive selection of cured meats and that’s just the start. But the real star of the show is the gateaux. Layer after layer of chocolate sponge, piled high, covered in the most lustrous chocolate icing, topped with a range of white and milk chocolate shards. It is almost too good to eat, but temptation wins, and oh! - it is like heaven in a mouthful! I can't stop myself as I take another bite, and another, and another...

After laying around, catching the last of the days’ sun, it is finally time to head back to the place where we are staying. Collecting my things from the top of the cave, I look down into the water below. I can’t resist just one more swim. So I jump. I jump off the cave and into the water below, still holding my towel and flip flops, but that doesn’t matter. The feeling as I leap into the water is second to none. That infectious smile is firmly fixed to my face for the rest of the holiday, I feel perfect happiness.

By Eve Foster, Year 12
Powered by