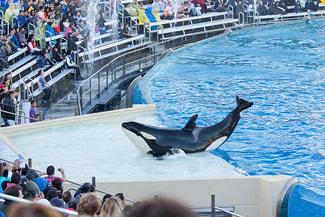 In the last decade, there has been a profound shift in people’s attitude towards the captivity of wild animals. In particular, the purpose of zoos has been under scrutiny, especially in relation to highly intelligent species such killer whales (which are actually a type of dolphin). We have moved from being a nation that mostly supported the conditions and aims of these facilities to one that constantly questions their ethics. Increasingly, the UK has tried to halt their existence: we no longer keep any dolphins in captivity, and are a prominent force in trying to destroy high profile organisations, such as SeaWorld, that do so in the United States.

Radical activist groups, such as PETA, claim that the lives of the animals at SeaWorld are filled with boredom and stress, because the animals are not in their natural environment. However, their lives can still be enriching despite the fact they aren’t in their natural habitat: trainers, who hold degrees relating to marine biology, zoology or psychology, dedicate their careers to the wellbeing of SeaWorld’s 21 killer whales (all living in the US). They spend years building a relationship with the animals. The three killer whale habitats consist of several pools, five million gallons of seawater and use advanced technology like height-adjustable pool floors and the ability to produce artificial water currents.

Animal rights groups also claim that dolphins should not be trained to do tricks for the purpose of entertainment. Training, though, is a major component in providing the animals with mental stimulation. It also gives them vital exercise that compensates for the fact that in captivity they don’t travel in search of prey. Most behaviours they learn are taught for the purpose of veterinary care or research - each whale is enrolled in around 20 independent research projects. The training is based upon positive reinforcement: desired behaviours are heavily rewarded and undesired behaviour is completely ignored, which means participation is on their terms. The dolphins are never punished, and enjoy the challenge and variation provided from learning.

In 2016, SeaWorld announced it had officially banned the breeding of all killer whales in their care, as a result of the immense change in society’s attitude. Since then, activist groups have constantly fought for sea sanctuaries in which killer whales can be lead more natural lives and then, perhaps, be rehabilitated for release. However, these whales were born and have lived their whole lives in a regulated environment where they receive complete care -  their ‘release’ would be a death sentence. The ocean poses numerous risks: it would expose them to new pathogens, pollution, varying water quality and temperatures, as well as natural currents, none of which they have encountered before. The most humane option is to let them remain in a zoological setting and live out their days amongst their pod and devoted trainers, whilst continuing to educate the public as well as promote conservation. Over the last decade, SeaWorld has rescued over 33,000 stranded animals and donated over £10 million to conservation efforts across the world.

This does not mean SeaWorld is a perfect organisation. There are improvements that can be made to improve the lives of the animals further, just as is with other zoos. However, their animals are happy and healthy. The real cruelty lies in the wild. Pollution and overfishing are having detrimental effects on the health of wild killer whales and dolphins across the globe. The UK’s only population of orcas has decreased to just seven members as a result of PCBs, a collection of chemicals currently leaking into UK waters and entering local ecosystems. Scientists predict that this pod are approaching imminent extinction and could be gone within the next decade.

There is a lot of misleading information surrounding animal rights, and the conservationist work of zoos such as SeaWorld. While keeping animals in captivity is not an ideal situation, it is the best available to us today. We should be supporting and helping to improve these organisations rather than criticising them.

Create your own unique website with customizable templates.
Photo used under Creative Commons from saebaryo
UA-121891675-1