Twin Peaks: The Return
What does it all mean? 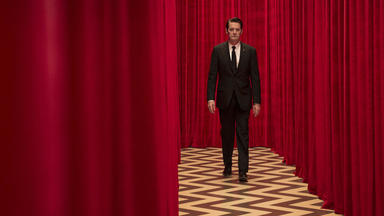 In 1990, David Lynch and Mark Frost released the first season of Twin Peaks, a bizarre TV show about the murder of Laura Palmer, a young prom queen with a hauntingly troubled life. The show broke every contemporary boundary, not just through its eccentricity and incredibly surreal imagery, but through its many multi-faceted storylines. It was the first television programme to revolve around an unsolved mystery that spanned many episodes, leaving every other TV show appearing boringly formulaic with little storyline at all. The second season ended on an incredible cliff hanger that left fans theorising frantically. David Lynch’s prequel film that preceded the film was even more surreal – to the point that it was booed at the Cannes film festival and universally hated by critics – and left audiences scratching their heads.
Over 25 years later, the third season has finished, and left its unmovable mark on television history. Yet again breaking every rule, the show had dozens of baffling storylines and the most surreal imagery ever seen on the small screen. It features a brilliantly slow pace that left many mainstream audience members dumbfounded: for example, there is a scene featuring two and half minutes of a man sweeping the floor to Booker and the MGs’ ‘Green Onions’. The most groundbreaking element was its surrealism, making the original look incredibly basic. For instance, there is an entire episode that shows an atomic detonation in the 1950s (which was completely out of context) and proceeds to show the audience the evil inside of the bomb; an entire twenty minutes of 2001; a Space Odyssey-like orgy of vibrant experiments of ink on film, whirlwinds of colours and dark, bewildering substances distortedly filming up the lens of the camera. We see images of a convenience store slowly fill with smoke in an anamorphic stop motion. Every episode features horrifyingly violent and surreal images that can ensure that it is the most mind-meltingly brave and avant-garde piece of mainstream television.
Perhaps one of the most interesting features is how Lynch comments on the nature of TV revivals. Over the past few years, we have seen popular shows such as The X Files and Entourage rebooted to make their producers more money. Twin Peaks does not do this. Lynch firmly crushes the expectation of nostalgia that many fans have in order to rebel against the mainstream and create an uncompromised work of art. Although we are treated to the return of classic characters and moments, such as Audrey’s dance and James’s song performed at The Roadhouse, very little of the show’s 18 episodes features the original characters and most of it does not even take place in Twin Peaks (to the extent that it is theoretically possible that the original two seasons did not actually exist). Lynch goes as far as presenting the main character, good Agent Cooper, as a completely different person, married with kids, and in a complete state of vegetation, unable to speak or function efficiently. Furthermore, the lack of nostalgia creates even more happiness and excitement at the rare moments (such as Cooper’s rediscovery of cherry pie) where we are reminded of the original show. Fans expect to be given what they came for in reboots: people want to see the jokes; the characters and the locations that they once loved, as they not only make them happy but more importantly bring them back to a fonder place in their minds: a time where things were better. However, things are not better, and Lynch sets out to remind audiences of this by placing such loved characters in troubling and unsettling situations and leaving out their most loved elements of a show in order to unsettle them and make an important commentary on the deterioration of society since 1990.
Lynch makes a poignant statement about American society and the shocking state that the country is in now compared to 1990. Like the rest of his work, Lynch ignores political movements and figureheads and instead just lets us observe his interpretation of society – the decline of America. Firstly, there is an important comment on the American healthcare system – or lack of it. During the series, we see random characters, unbeknownst to us, with a variety of wounds and illnesses. There’s the unexplained woman in The Roadhouse with a rather nasty looking rash that she “cannot” see the doctor about. Or there’s the woman that Richard Horn beats to a bloody mess who “cannot afford the appropriate hospital treatment”. There’s the disgusting character of the drunk, who spends all his time in a jail cell bleeding heavily, as he cannot afford treatment. All of these and more are a nod to the fact that America is yet to set up nation-wide healthcare, and as a result, people are suffering.
The original seasons found themselves concerned with the rising percentage of youths addicted to drugs and suffering from mental health issues. The Return touches upon the matter further, frequently showing ill-looking youths (one of whom is the mother of a malnourished child) who steal from their parents in order to perpetuate their troubles. There is teenage suicide present in the show, and even the beloved character of Lucy is implied to be suffering from mental illness.

Lynch’s disgust at the fact that America has become a country owned by corporations - and possibly at a corporate, billionaire capitalist becoming president - is also evident. One of the most famous images from the original – Norma’s cherry pie at the RR diner – is said to become bland at the various chain stores set up around the country, because competing chains drove her to sell out and become a multi-store business. The once booming logging industry in Twin is now almost dead as manual labour is replaced by machinery and factories shut down.
At several points during the season we see America’s diabolical problem with guns: a fatal and bloody shootout in a residential area over someone parking in someone else’s space takes place; a child shoots a gun into the RR for no reason and over a dozen other characters are seen carrying guns ‘just in case’.
One of the original season’s biggest concerns was about sexism towards women in American society, and the new season shows this even more graphically. We see women beaten at several points throughout the show; women are disturbingly sexualised by many characters; harassed in bars; discriminated against in the workplace and even raped, as in Diane’s harrowing account of her last memory of Cooper.
[From this point onwards there are spoilers.]
All of these moments give the show its dark tone. However, in common with almost all of Lynch’s work, he is incredibly intrigued by dreams and their very nature. We don’t explicitly view anyone’s dreams (although many theories have emerged contradicting this), and yet the show maintains a disturbingly accurate dreamlike atmosphere throughout. So surreal as to be nightmarish, the bizarre black/white lodge and convenience store scenes are luridly unnerving – and so frequent – that they completely overthrow the lighter, comedic elements of the season. Many storylines also reflect dreamlike realities. The many incarnations of Dale Cooper often take place in different realities that are mind-bogglingly surreal and trippy. There’s Gordon Cole’s dream where Monica Belluci tells him that we are all “like the dreamer who dreams, and then lives inside the dream” and the Audrey storyline literally sees her trapped inside her own dream. Similarly, the last two final episodes tell us that “We live inside a dream” and possibly rewrite the original storyline by allowing Laura Palmer to live. We see Cooper and Diane follow the cryptic instructions that we are bizarrely told by backwards-speaking characters throughout the show – completely out of context – and enter into a parallel universe where they have completely different names, have multiple versions of themselves and realise that characters such as the Palmer family never existed. They don’t even know what year it is.
Kyle MacLachlan’s ominous portrayal of the evil Cooper is especially terrifying, as is some of the music in the show: Penderecki’s Threnody is incredibly unsettling, as are some of Badalamenti’s original pieces of music, as well as the David Lynch remix of ‘American Woman’. Each episode is rounded off with a performance from a band at The Roadhouse, where we are usually introduced to random characters whom we never meet again, and with the help of the vibrant blues and pinks used in the cinematography, the Roadhouse becomes an equally ethereal and dream-like escape from the nightmarish content of the episodes. (I should also add that the music in the show is incredible, featuring artists like Sharon Van Etten and Otis Redding while introducing so many brilliant ones, like Au Revoir Simone, The Veils, Eddie Vedder, Chromatics and The Nine Inch Nails.) The cinematography throughout the season is so avant-garde and dreamlike, with the camera shaking incredibly violently at points, and the neon haze of diners blending with the streetlights that melt orange coloured shapes into the lens.
​There needs to be a fourth season, not only because of all the loose ends that need tying up, but also because of the true artistic brilliance of the show. I thoroughly recommend this show as a gripping murder mystery, surrealistic nightmare and for its social commentary.