Support and compassion for Ukraine 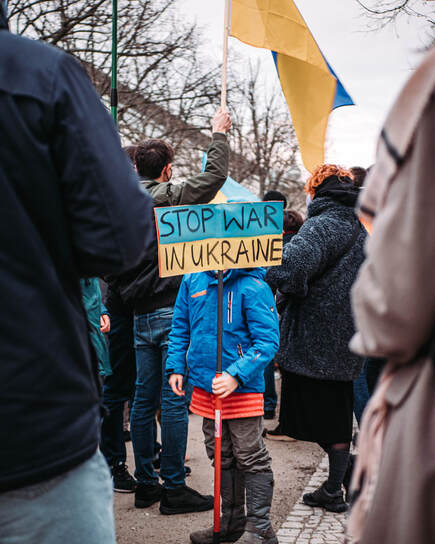 Emma Hills reports on the crisis in Ukraine and what we can do to help.

Like many of us over the past few months, I have found it very difficult to process the unfolding situation in Eastern Europe. I have been horrified by the incredibly inhumane actions of the Kremlin that have inflicted so much suffering. My thoughts and prayers go out to all of those who have been affected by the Ukraine crisis, especially those who are having to evacuate their country or have lost loved ones. We must all stand with Ukraine and its people and support in whatever way we can.

Firstly, let’s set out the facts. On 24 February 2022, Vladimir Putin ordered the invasion of Ukraine. The motives behind this are incredibly complex and involve years of building tensions between the two nations, many of which can be traced back to the era of The Soviet Union when Ukraine did not have status as an independent nation. As of the end of April, 1,417 Ukrainian civilians have been killed as a result of the attacks on Ukraine and thousands more have been severely injured. More than 2.32 million Ukrainian refugees have already crossed the border to Poland and other neighbouring countries.

When discussing the events of the war it is important to differentiate between the Russian people and the actions of the Russian government. Russia is currently a dictatorship and Putin is the autocratic leader who is responsible for the attacks on Ukraine. Putin also imposes strict censorship in Russia meaning that the Russian population does not have a clear picture of the atrocities that are being committed by the Russian army. Moreover, those in Russia who do oppose the war are subject to laws that restrict their right to protest. A recent law that has been passed subjects anyone who distributes what the Kremlin describes as ‘false news’ about the Russian military to a 15 year prison sentence.

So what is being done to aid Ukraine? Rather than countries from the West sending in troops to fight, they have been introducing sanctions against Russia such as freezing Russian assets in their country and making sure that the oligarchs aren’t so privileged in these places. Even Switzerland (which has been neutral for a very long time) joined the EU in this effort and put in the same sanctions. Countries including the UK have also sent financial aid to Ukraine and supplies of military equipment.

In the end, we can all feel a bit hopeless just sitting at home, watching the news and keeping updated on what’s going on, so what can we do? There are many charities that you can donate to. I donated, with my family, on the UNICEF website and there are so many other places that are also working to support families in the war zone. Alternatively you could find a local organisation that is collecting donations of essential supplies for Ukraine. Things such as clothes, sanitary products and first aid supplies are all in demand. Anything that you do or contribute will help.

Keep Ukraine and Russia in your thoughts and please donate, (even if you can only manage a small amount) because everything helps.