The return of jump racing and the latest in horce racing 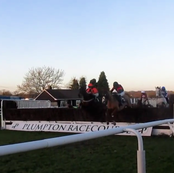 Let’s get the party started – jump racing is back!

Since the last issue of The Vine much has happened in the world of horse racing with the return of jump racing.
The home of national hunt racing (Cheltenham) returned to full action again, having featured two high class meetings: the Showcase and the November meeting. The Showcase included some rising stars of the coming season to follow as well as competitive racing action. Some high-class individuals were Brillare Momento, who justified his favouritism to win the opener on the Friday in good style - up the famous Cheltenham Hill and Foxtail Hill, narrowly beating Le Prezien in the two-mile handicap chase; a great battle. Tim Vaughan eventually got his first victory at Prestbury Park for current champion jockey Richard Johnston. It took him many attempts over the years but the hard work and persistence paid off in the ultra-competitive 21 runner handicap hurdle with Master Dancer. One eye-catcher came in the bumper (a flat race for young horses to progress into obstacles later in their careers), in which the Fergal O’Brien-trained Herecomestheboom (one of the many interesting horse names) romped up. He looks a smart prospect going forward. Some runners enjoyed double success at the track with wins at the both the Showcase and the November meeting. Thomas Campbell qualified for the Pertemps final (a staying hurdle series) and won a listed contest in gruelling conditions. North Hill Harvey cemented his authority by winning two novice chases one of which was the Grade 2 Arkle trial – could this be a future festival winner in the making? Bryony frost added two more wins aboard Black Corton. Again, targets could feature towards the festival in March. However, she was beaten at Newbury mere weeks later in another Grade 2: The John Francome novice chase.

Action turned elsewhere with Wetherby hosting the biggest day in their calendar with their feature: the Grade 2 Charlie Hall chase. Gold cup hero Coneygree failed to show sparkle and pulled up with yet another injury, suggesting another cup may be out of reach now. Cue Card also lacked class by falling heavily; he returned in the Betfair chase at Haydock three weeks later and was beaten into second by the dominating Bristol De Mai, trained by Nigel Twiston Davies, who bolted up in both occasions. But does he need soft conditions to win? The other feature was the Grade 2 West Yorkshire hurdle, with Colin’s sister staying on strongly for Fergal O’Brien again. On the same day, down South at Ascot, the local trainer Gary Moore enjoyed a double with the promising novice chaser Benatar who followed up at Plumpton and now qualifies for the Cheltenham festival bonus of £60,000 if he wins a chase at the festival. The other winner was Dell Oro, for the same owners, who could go onto better things in time. Meanwhile, the feature on that card was the Sodexo gold cup where Go conquer conquered the field to win comprehensively.

Another small track hosting their most prestigious meeting of the year was Wincanton in murky, soggy conditions. Modus won the rising star novice chase; he could be a very talented chaser as the season progresses. The big contests were the Grade 2 Elite hurdle, which went to London prize who deserved a big win for the

Ian Williams team and the other feature – The Badger Ales trophy. This went to Present Man and Bryony Frost who gained another big success in front of a large crowd hanging on from the persistent challenge of Final Nudge. Aintree started their season with the Grade 2 Monet’s garden Old Roan chase where the old poplar grey horse, Smad Place, prevailed. Down in Sussex, Fontwell Park staged the 2017 running of the Totepool Southern National, where Cresswell Breeze was positioned perfectly throughout the race in the stamina-sapping three and a half miles to score.

Back to Cheltenham, and Finian’s Oscar was a poignant winner at the November meeting, given Alan Potts had passed away, and only months after his wife, Ann. Fox Norton was another winner for connections who took the Grade 2 Shloer chase. All jockeys wore black armbands for a mark of respect to their contributions to horse racing. Kingswell theatre bolted in the cross country race, and made all the running, showing no stamina doubts in the three mile, 6-furlong marathon. Apple’s Shakira looked impressive in the juvenile hurdle division whilst Prefect candidate slugged it out to achieve another Cheltenham victory. A splash of Ginge surprised all with the Bet Victor gold cup, but only just, as the winning margin was only a neck. Elgin followed up his Ascot win in the feature on the Sunday in the Greatwood Hurdle for the Elite racing club – adding another glorious day for the owners. Slate House is definitely a runner with some class; he took the supreme trial in fashion in dazzling conditions - only four hurdles were jumped in the two-mile race.

Three important races were staged at Ascot later in the month with the Lil Rockefeller overturning long odds on favourite who disappointed: Defi Du Seuil. Top Notch was exactly that in the Grade 2 1965 chase, winning comfortably. Former champion chase winner Sire De Grugy couldn’t handle new top weight as Sir Valentino returned at a big price - providing a surprise in the Shawbrook handicap chase. Paddy Brennan got compensation for getting swapped on cue card by scoring on Chase the Spud, who proved to handle the heavy conditions, in a stayers’ race at Haydock on the same day.

The Ladbrokes winter carnival at Newbury (in Berkshire) gave plenty of good form, with day one featuring the return of Thistlecrack from injury, having had 11 months off since winning the King George at Kempton last Christmas. He probably needed the run. However, the party in the race was for Beer Goggles who came home at a huge shock at 40-1 in the long-distance hurdle. Willoughby court made a nice performance in a novice chase, beating the classy Yanworth. Old Guard returned to good form for Bryony Frost once again. The feature was the historic Ladbrokes trophy (formerly the Hennessy gold cup): it featured 2015 gold cup hero Coneygree, who has had yet another injury and surely now could be passed his prime. Whisper ran a blinder, finishing 2nd again but this time behind Total Recall who found a late burst of power to nap the Henderson horse and become the first Irish winner of the race since 1980. The other venue with excellent action was Newcastle, featuring the fighting fifth hurdle where Bueveur D’air responded to the comeback of Faugheen in the two-mile hurdle division, which currently looks like a two-horse race. With the national hunt season back in full swing, we are already seeing that some future stars could play important roles at the spring festivals.

The racing in 2017 has been magnificent and memorable with particular stand outs coming from Might Bite, drifting left to right up the Cheltenham Hill at the festival back in March, and Sizing John, powering to the front to take the blue riband event – the Cheltenham gold cup. Scotland took the Grand National with One for Arthur, whilst Altior dominated the two-mile novice chase division.

On the flat for the summer of 2017 and Enable blew her rivals away with 5 Group 1 wins. Aiden O’Brian made horse racing history by breaking the record of Group 1 wins in a calendar year. And 2018 could very special if Enable can continue her flying form and if Winx comes to the northern hemisphere for the first time – maybe at Royal Ascot. Closer to the current day, in which the festive period holds many questions to be answered: Kempton, Chepstow and Cheltenham are in the new year and, finally, the biggest national hunt event in Sussex is coming in early January at Plumpton with the 2018 running of the Sussex National.