A story given new meaning by Death 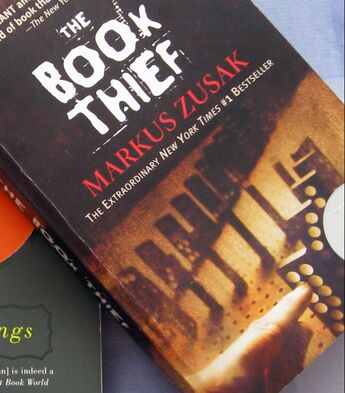 “His eyes were the colour of agony, and weightless as he was, he was too heavy for his legs to carry.” – The Book Thief, Markus Zusak

A book narrated by death will always spark curiosity in a potential reader. However, contrary to how Death is commonly perceived, he claims to be “amiable, agreeable and affable.”

This is a harrowing novel that follows book thief, Liesel Meminger, living in Nazi Germany, after Death collected the soul of her brother. Throughout the book it shows her growing friendship with a young boy, who paints himself black with charcoal, her accordion-playing foster father, her foster mother, who was shaped like a “small wardrobe”, and a Jewish fist-fighter with hair “like feathers”.

Through the life of these charming characters you get a glimpse into Death’s perspective of Nazi Germany. As expected from a book told by Death during World War 2, it discusses dying multiple times. However, what makes this book differ from other morbid World War Two stories is the abstract way in which it’s told; the book describes an abundance of souls being carried away from the battle fields, bombed cites and trucks crowded with Jews – some gave into death willingly, others ran from it. During the novel the souls are assigned colours – which only emphasises Zusak’s eloquent writing. “Five hundred souls. I carried them in my fingers, like suitcases, or I’d throw them over my shoulder. It was only the children I carried in my arms.”

We, as humans, have the notion to fear death. However, throughout the book it shows how death is actually “haunted by humans”. Death is an intriguing, layered character who does not take joy from taking human souls and struggles with the ongoing war. You would think “war is Death’s best friend”, but this is shown not to be the case. Markus Zusak’s ideas are thought-provoking and utterly unique. The writing is brimming with metaphors and poetic language; it’s just as saddening as it is beautiful.

Everyone can take something from this book – it’s one of those stories that is so painfully truthful that you have to stop reading every so often to process it. Although it’s a fairly long book and starts off a little slow, it will capture your imagination and show an alternative perspective to war and the horrors it brings.

Create your own unique website with customizable templates.
Photo used under Creative Commons from Ruth and Dave
UA-121891675-1