Clowns to the left, jokers to the right… 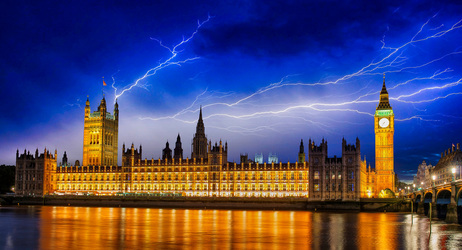 ​In those rare moments when my political pragmatism is replaced by an angry feeling of despair at a particular political act; whether it be Brexit, the lack of support for refugees, or the government’s strange obsession with urbanising green spaces; I have that special happy place to turn to. The left wing of the Conservative party, the right wing of Labour. The middle ground: so perfect, both ideologically and practically sound. Somewhere between Cameron and Blair I can rest, safe and warm, economically literate - socially liberal.

Or at least, I used to have that place to turn to. The alarming “don’t call me racist” from Amber Rudd at the Conservative Party conference on Wednesday, just before she said something racist, has somewhat shattered my illusion that the Conservatives could be outward-looking and socially liberal. The ‘Make Britain Great Again’ rhetoric by Theresa May is even more alarming. Apart from it being very close to UKIP’s referendum slogan, doesn’t it remind anyone of the chants at every single rally held by the massive orange bigot currently peacocking around on the other side of the Atlantic? And to think I’d been pleased to have Theresa May as PM. Apart from her slightly warbling voice (“It’s like being back in the eighties,” said my mother. “Thatcher reincarnated.”) she seemed sensible, practical, and by all accounts free from scandal and extreme views.

Hah. Politicians seem determined to beat down the hope of centrists with a large, extremist stick.
On the other side, a Labour party heading back to its socialist roots doesn’t offer me any comfort either. The extreme left making a resurgence is deemed by many to be a good thing, and they may be correct, morally speaking. However, anyone who actually thinks a hard-left government would deliver a strong leadership is quite clearly either mad or an ex-coal miner. With the twice-risen Jeremy Corbyn has come the rise of a new kind of Trotskyism. For anyone not familiar with it, it is the sort of thing that angry teens in deprived areas – usually in the North –  would shout about while drawing obscene images of Tory leaders on walls. Something along the lines of a global uprising of the working class to overthrow the establishment, using violence if possible.

The thing is, while Corbyn seems like he could be a man on a mission to overthrow the establishment and bring about social justice to millions with the introduction of an all caring, all loving, all seeing state, no one really knows. As far as policy is concerned, the only thing which is clear is that Jeremy Corbyn really hates large missiles. Most of the Labour party really love large missiles. This causes missile-related tension.

Yes, arguably Corbyn is bringing Labour back to where it is meant to be, and to the people it is meant to represent. It is meant to represent people like the Corbyn supporters group Momentum, which (apart from sounding like a boy-band from X-Factor) do a lot of marching, yelling, hashtag-creating and saying things which wouldn’t be out of place in war-torn Belfast of the late nineties. However, some may argue that their methods aren’t entirely beneficial to the ‘stable’ Britain of 2016…’stable’ for lack of a better word. It is meant to represent working class people on benefits and the swathes of the North which need renovation of their housing estates and factories. A left-wing party has a role within the political system. Yes, I will give you that, comrade.

However, isn’t it interesting to note how as soon as Labour painted over the ‘New’ and dumped Tony Blair’s policies in the shambles of 2008-2010, they were suddenly no longer in power? Like people coming home drunk from a party - knowing they’ve had a good time but have made a bad decision they’ll regret in the morning - Labour returned to the opposition benches, and have since remained there.

2010 marked a high point for centrist policies. With Cameron’s modernisation of the Conservative party (“No! Bad backbencher! We don’t do racism anymore! We love the EU, and we are most definitely legalising gay marriage!” yells Cameron) and Nick Clegg’s admirable efforts to turn the Lib Dems into a respectable, modern, believable alternative to two-party rule, I would have been very happy if I’d been old enough to care.

The phenomenon of ‘Cleggmania’ really highlights the need for a centrist party. The Lib Dems provided a perfect middle way: economic sanity, liberal views on issues such as benefits and the NHS. If they had to sacrifice their integrity and form a coalition, they weren’t afraid to do it. They were led by a smoot- talking, primeministerial, youngish, outward-looking fresh face. They had all the essential components of a political party: a history fraught with infighting, wealthy donors, an ideology, and support. They were credible, sensible, even lovable. I mean, hell, they even had an attractive leader.
But where are the Lib Dems now, as I denounce the Tories and cry over a photograph of Tony Blair?
They are nowhere to be seen. Their conference last month went unnoticed by most, their policy manifesto manifestly dull. A suggestion of a move towards an informal coalition with Labour and other left-wing parties prompts a groan from centrists but only a furrowing of brows as they try to remember who the leader is (“Someone Fallow, innit? Um… Bill? Fred? Tim? Ah, Tim, that’s it. Tim Farron?”) from the general public.

Yet, this is simply ridiculous. The general public are mostly centrists. After all, the last twenty years have been the domain of PMs elected on policies of centrism. A centre-right party? Seems hard to imagine such a thing in these times of blatant racism, vile patriotism, and barely concealed communism. Yet it could just be successful; after all, sanity was the future once.

Create your own unique website with customizable templates.
Photo used under Creative Commons from derrickbrutel
UA-121891675-1