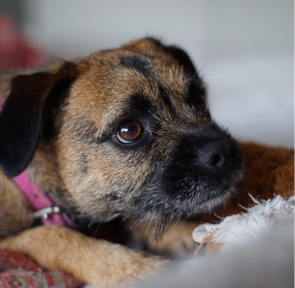 Hi I’m Missy Elliott; I’m not a rapper, I’m a border terrier. I’m three years old but I look like a puppy, which is fortunate for me because it means I can get away with anything, ESPECIALLY in public. What keeps me looking so young? Well, after many requests I’ll drop my skin care routine titled ‘Faecal Foundation’ and of course my strict diet which I’ll also drop to you guys titled ‘How Cow Pat Changed My Life’.

2020 has been the greatest year of my life (although it didn’t particularly start that way). This is quite a statement considering in 2019 I ran for miles and miles on a beach in Devon chasing some stupid birds and then suddenly I turned around to see my humans were a tiny dot in the horizon. They were so impressed with my chasing that they started cheering my name and waving a carrot in the air. Although big empty beaches are great, this year has been something else.

It all started right after the month where some of my humans ate their big rectangle biscuits, sang songs and opened unsmelly things (which is usually covered in rippy stuff I usually take to the corner to tear up for my own enjoyment). The smaller humans disappeared for a bit though, which was very sad. I even started to miss the one who gave me lots of treats even though she used to drag me outside to make me jump over things. I also missed the sleepy one. I especially missed jumping on his head whilst he was asleep before going outside for a morning bathroom trip. But at least one of my trusted humans was back now to tickle my belly whilst he was talking into his strange toy. Time went on and surprisingly, the loud one also left, apparently to go live somewhere else by herself to go help sick humans. Sometimes my trusted human would open the door and I would check the dog bed to see if she had come back. But no one came back, no matter how many times I checked each room.

My trusted humans started to take me out on great walks but there weren’t so many peemails around anymore, so I guess some of the other dogs weren’t coming to the forest as much. This was great for me because it meant that sometimes my trusted humans would let me off the lead. Unless they saw a spaniel. I love spaniels, they’re so much fun, I love chasing them, following them into the water and barking at them. My humans don’t like spaniels for some reason, if they see one they put me on the lead and get as far away from them as possible. Humans. They just don’t make any sense at all. Till the next time,