Is fake news fuelling a fear of the media? 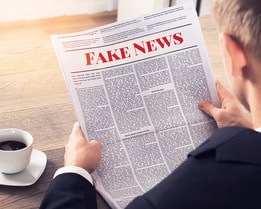 Brexit. Trump. Climate change. Suddenly the world seems terrifying, full of people about to blow it up with nuclear missiles, or destroy it by cutting down all the rainforests. And as if that wasn’t enough to worry about, now we’re told that all the newspapers and websites and social media - the places we rely on for information - can’t even be trusted to tell the truth.

‘Fake news’ seems to be the phrase of the year. Whether it’s Cambridge Analytica getting busted for sending us adverts to influence our voting, or Donald Trump using the term to shut down anything he doesn’t like, it seems that you can’t get away from it. How many times has Trump accused someone of ‘FAKE NEWS’ because they said something that was against him - but quite possibly true? In a world already riven by danger and uncertainty, it seems we can’t trust anything anymore. And that’s scary.

From the way fake news is being talked about, it would seem like every news story - on Snapchat, or Instagram, or BBC News - is lies. And that’s not true. The important thing to remember is that it might be biased. To identify actual fake news, simply see if you can find other reputatable outlets reporting the same information. Sometimes, there’ll be plenty of other evidence on news sites, and sometimes there won’t be. Even if you don’t find any other evidence, it could still be true. Just don’t be certain that it’s right and tell everyone that Donald Trump is actually a fake and the real one was kidnapped and is now living in an underground dungeon in Toronto.

Some news sources are also more accurate than others. Respected news sites, such as BBC News, are more likely to be right. If it’s a post on social media from a personal account, or on a website you’ve never heard of before, be more cautious. Any website with a clear agenda, such as one made up of photos of Jeremy Corbyn covered with love hearts, is possibly less accurate.

See it this way: ever since you were a little child, you’ve been told that some websites aren’t always right. And there have always been people in our lives who say they’re skipping school to go on holiday to Barbados, or come into school saying they met a celebrity in Aldi... until you find out that they were actually seeing their nan in Grimsby, and that ‘celebrity signature’? Faked with a napkin and a crayola marker pen. Newspapers and magazines have always had an agenda in mind, exactly like everyone else. Now, we are just more aware of it.

Still, it’s important to know that the effect of fake news goes far beyond just inciting riots in the playground because someone started a rumour that the school is going to stop selling chips. Cambridge Analytica ended up in a lot of trouble because they used people’s Facebook details to influence how people voted with smear campaigns and targeted adverts. In Nigeria, BBC News reported that people are using Facebook to share photos of violence (which are several years old and unconnected) and connect it with another ethnic group in order to sow hatred among people. One man was attacked and killed as a direct result of these adverts, for crimes which not only did he not commit, but happened years ago or not at all.

Fake news isn’t a new phenomena. For as long as people have been telling stories, there have been others changing the narrative to fit their own agendas. Shakespeare wrote Richard III in order to please Elizabeth I, by making her family to look like the good guys, but there’s no evidence for much of what he wrote. Who knows how many of the stories we know of about the past started out as an exaggeration, or were designed just to make someone look good? Fake news isn’t something to be scared of, and it doesn’t mean that you’re unable to trust anything at all. It’s just something to be aware of; make sure the news is backed up by evidence before you share it.

Create your own unique website with customizable templates.
Photo used under Creative Commons from mikemacmarketing
UA-121891675-1