A dangerous time to play a Trump 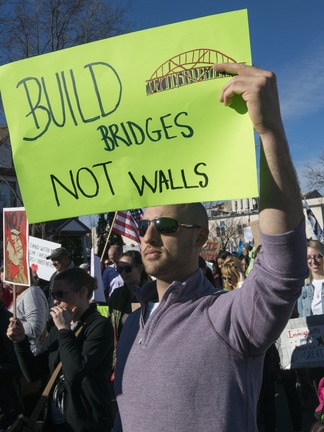 With the inauguration of Donald Trump on 20 January 2017, a day which will probably go down in history as the day the world began its free-fall off the edge of a massive cliff, we entered a new era. An era in which politics has become something quite different to anything before.

Trump’s speech was unlike any other inaugural speech. While he stood in the drizzle, high above his tiny crowd, a perfect target for an opportunist sniper, he spoke of tombstones and rust, burnt out and shuttered factories, a dying America which he pledged to bring back to life. More worryingly, he spoke of ‘America First’, which, apart from seeming a little too patriotic to be healthy, was the rallying cry of American Nazi-sympathisers in the Second World War. That’s as close to comparing Trump to Hitler as I’ll go, but it is difficult to show quite how dangerous a time we are in without placing it in historical context.

Because this is a dangerous time. There is little point in pretending it isn’t. I’m not saying that you need to start building your nuclear bunkers right this minute or that you need to stockpile baked beans and tinned milk for an economic crash, but a President enforcing a ban on nationals from seven Middle-eastern countries within two weeks of taking office is clearly a warning of things to come.
In his first few days in the Oval Office, Trump has done several things which should be cause for concern. Firstly, he has signed an executive order to roll back the Affordable Care Act (Obamacare) to the “maximum extent permitted by law”. Thank goodness he’s not doing anything illegal. Really fills you with confidence, doesn’t it?

He also signed an executive order to ensure that federal money cannot go to organisations which provide abortion services, despite Obama signing an executive order to protect Planned Parenthood in his last days in office.
He signed an action to make construction of the controversial Keystone and Dakota Access Pipelines easier, and has banned federal environment agencies from speaking to the media about climate change.

To cap it all, in a now internationally condemned move, he banned nationals from seven Muslim majority countries entering the US. With people being detained at airports and in several cases being denied access to attorneys, Trump proclaimed that the ban was a success. Right up until the courts put the brakes on it. And once that happened, he denounced the legal system and the judges operating within it. Many commentators noted that while the seven nations are not responsible for any terrorist attacks in the USA since 1974, the countries whose nationals were responsible for terrorist attacks such as 9/11 have not been blocked from entry. Quite by coincidence, I’m sure, Trump has business interests in these countries.

In an infamous press conference, Trump’s press secretary Sean Spicer told the assembled and probably very depressed reporters that Trump’s inauguration crowd was the biggest in history, period, as if saying ‘period’ makes a provable lie into the truth. But apparently it does now, according to Kellyanne Conway, Trump’s campaign manager turned master of illusion, who said that Spicer had been using “alternative facts”... just around the time that she mentioned the 'Bowling Green Massacre'. Something that never actually took place.

Alternative facts? A powerful government telling outright lies and turning them into the truth because if there is no truth then how can you ever disprove anything? Sound at all familiar? Anyone who has read Orwell’s 1984 should be starting to feel shivers right about now.
And that’s only on the domestic front. The isolationist, nationalist rhetoric which Trump so skilfully combined with growing dissatisfaction among the white middle class really came to the fore in his inauguration speech. If his social policy is reminiscent of the 1920s, then his economic policy definitely is.
Before World War Two, America had no interest in the world. It adhered to the Munroe doctrine, which is the idea that America only cares about what happens in the Americas. Domestic policy, in such a geographically large nation, was more important than foreign policy. America turned away from the rise of fascism in Europe in the 1920s and 30s, more concerned with its own economic recession. But the war drew America in and when it emerged on the other side it was a global superpower. America engaged in the peace process and with keeping peace in Europe, and took down the Soviet Union. International policy became a crucial part of American politics, for both Republicans and Democrats.

Trump wants to change all that. The breakup of the European Union would be great news for Trump’s America, and the rise of nationalism in European countries probably has him rubbing his tiny hands in glee. American withdrawal from the international scene could result in rising extremism, both in America and beyond, and a fragmented world with expensive trade deals, a lack of cohesion, and no common principles to adhere to. A dissatisfaction with global trade, something that was a key aspect of Republican policy in the past, allowed Trump to exploit racism in America’s white middle class, and, in true demagogue style, provide an answer to the problem of a shrinking job market.

Trump’s method of blaming immigration for the unemployment levels in the squeezed middle class was a time-bomb long in the making. In many western countries, domestic policy has failed to keep up with increased global trade, and this has resulted in jobs being outsourced to those who will work for less and jobs being given to immigrants who have a significantly better work ethic.

The world leaders who previously committed to the EU and trans-Atlantic partnerships, in Obama, François Hollande of France, Matteo Renzi of Italy, and David Cameron of the UK, are all being replaced by Eurosceptics or nationalists. The rise of right wing populism in the UK and France, with UKIP and Front National, is echoed in Trump’s victory in America. Soon, only Chancellor Angela Merkel of Germany will be left with a strong sense of what the European Union represents, and the power to do anything about it.

Under Trump, America will no longer be the centrepiece of NATO, and expecting American help in military situations where no American interests are at stake is pointless. The North Atlantic Treaty, signed on 4 April 1949, may as well be ripped up now and thrown into the cold grey waters of its namesake.
The peacekeeping work of the last fifty years may withstand the test of Trump and Brexit, the growing fascist undertones in the West, the powerful dictatorships in Russia and China, the unpredictable communist state of North Korea, and the threat of terrorism which will be less easy to combat in a fractured world. Or maybe in 20 years the ‘United States of America-Russia’ will control the world markets; Europe will be attempting to repel invaders while maintaining a scrupulous human rights ethic; the Middle East will be known as ‘Putin’s petrol station';, and the UK (what remains of it after Scotland relocates to the Bay of Biscay) will be crying alone somewhere in the Atlantic.

Maybe we’d better get those bunkers built, after all.