Flying the LGBT flag: fighting for freedom in the 21st century 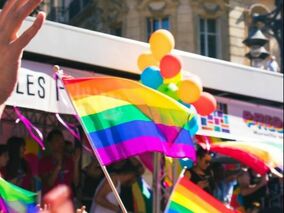 In the month of Valentine’s Day, it’s easy to get lost in the teddy bears and cheap plastic hearts. It’s easy to forget that this is also the month devoted to to the LGBT community. While many heterosexual couples freely celebrate their relationships, homosexual couples are not afforded the same luxury. They are haunted by the continuing threat of social persecution for their sexual orientations.

Gay people have been persecuted for centuries. Despite homosexuality being found to naturally occur in an astonishing variety of species, the human race is seemingly the only one to have established an ideology of homophobia. Baboons will have sex with each other as a greeting, regardless of gender, but humans will kill each other over same-sex relations.

From the first gay on-screen kiss being aired on American TV in 1991 to the inclusion of non-binary and transgender characters in contemporary television, the LGBT community is, however, becoming more and more represented in modern media. Though show business continues to perpetuate horrifically stereotypical portrayals of LGBT+ characters, these characterisations are slowly becoming a thing of the past. More shows are presenting LGBT life and relationships in a way that allows audiences to sympathise and relate. There has been a huge change in social and political mentality; when I was younger, I used to desperately look forward to watching Glee because it was one of the few shows that accurately represented LGBT+ characters - but it was only on once a week. Now, you’d be hard-pressed to find a blockbuster film or Netflix series that didn’t have at least one person who identifies as something other than a cis heterosexual.

As someone who hasn’t suffered from intolerant friends or narrow-minded family, I can’t say I’ve personally faced severe homophobia - but I know many who have. The more LGBT+ friends I make, the more stories I hear of shocking prejudice against people’s sexuality or gender presentation. With outcomes ranging from verbal bullying to complete abandonment, homophobia is doubtless a disease in our society.

More and more of us are spreading the message of equality, acceptance and freedom. We can live and work together. While not everyone will see eye-to-eye on every tiny matter, that’s okay: all we really need to do is rid ourselves of constrictive, socially-imposed labels. Only one label need remain: ‘human’. Because, when it comes down to it, that's what links me with you; us with them. The solution is to treat everybody as people - as humans.

LGBT History Month should be celebrated by everyone, even those who don't consider themselves a part of the community. The word ‘gay’ should be synonymous with the word ‘pride’. We deserve, in the very least, to be proud of ourselves.