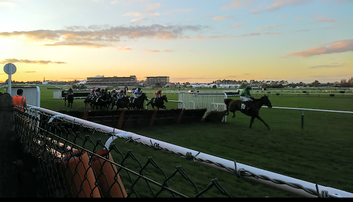 Photo by Kyle Merrick
If you are new to racing, or have never experienced it before, then this article will get you up to speed with all the latest developments in the sport of kings.
This September in the horse racing world it was a rollercoaster of highs and lows. One major event of the month was the St. Leger Festival at Doncaster where, over four days, we saw the best of every aspect in racing. This included the oldest Classic: the St. Leger, which is run over a stamina-sapping one mile and three quarters - making it the longest of the five British Classic races. These are races for three-year-old Group One horses to see which one has the best stamina to last the long and demanding journey. Group One horses are those of the highest class.


The four-day festival was building towards the feature of the St. Leger Stakes - another one of the Classic races - which was run at a true pace. There was a line of three within the final two-hundred metres, until the Aiden O’Brien and Ryan Moore combination struck again. Their excellent relationship with the horse Capri made it a successful day for punters as the favourite powered away to win. Capri could be one to watch out for next season in the long-distance races, especially over in Ireland.


Ayr racecourse was planned to stage its biggest meeting of the year, with three days of top-quality action, including the running of the Ayr Gold Cup for sprinters. Due to heavy rain, the entire meeting had to be abandoned, which forced the race to be switched a week later to Haydock. Still in very soft conditions, Donjuan Triumphant lived up to his name, winning by a short head in gruelling conditions. At the same track, on the outskirts of Liverpool, another top race is staged for sprinters three weeks prior: the Sprint Cup. It went to the favourite Harry Angel, who impressed all. This confirmed his star qualities - perhaps he could challenge Lady Aurelia next year?


The beginning of October over in France featured the richest turf race run in Europe: the Arc de Triomphe, run over one mile and a half, which saw 18 runners from five countries (Britain, France, Japan, Germany and Ireland) come together for the spectacle. It was run at a strong pace, and was one of the best performances of the season. Enable, a fabulous filly, hit the front with 300 metres to go. She waved goodbye to her rivals and left them trailing behind as jockey Frankie Dettori took his fifth Arc win, and Enable’s fifth Group One win, following the Epsom Oaks, Irish Oaks, Yorkshire and the King George. This cemented her star quality and it was a pleasure to watch as she overcame a challenging draw of two whilst being temporarily sandwiched between two of Aiden O’Brian’s horses - she powered away to success. Could she battle against Winx over in Australia next year? Winx is currently unbeaten in 21 consecutive races.
On the same day Aiden O’Brian crept closer to the all-time record of Group One winners in one season; it is currently 25. He had two winners, including Happily and Rhododendron, in the Group One fillies contest. The French only had one winner with Wild Illusion taking the Prix Marcel Boussac - a race open to two-year-old thoroughbred fillies. O’Brien is now at 23 wins, with Roly Poly winning the Sun Chariot.

​Closer to home, in Sussex, Plumpton started their new season with Family Day on the 23rd September. With good weather and a large crowd, it was a very enjoyable event - especially for the Moore family, who were the champions of the trainer and jockeys challenge last season and so received their respective trophies. East Indies won the two-mile handicap hurdle (a race in which the weight a horse is expected to carry is determined by the official handicapper) as she did for the same fixture the year previously. Arthington remained unbeaten over hurdles in the opener and Alan King took another juvenile hurdle success with City Dreamer. This was one leg of a double for Tom Cannon, who enjoyed a good day with the other leg winning aboard Rob Robin in the finale. This was only 30 minutes after unseating at the final fence on The Tin Miner. It could have easily been a treble.