Turn the alarm clock off: my brain hurts 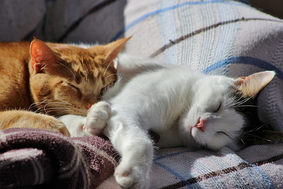 Have you ever been forced to go to bed ridiculously early to ensure you wake up early enough for school? Did you ever disagree? Have you ever struggled to get up at a ludicrously early hour? Of course you have.  Well it turns out we're not just moaning for fun.  Scientists finally agree that waking up to go to school early in the morning could be damaging for teenagers.

Scientists have said that young people should follow their natural sleeping pattern of later nights and waking up at 9-10am. This pattern of sleep is called your ‘time shift’ and apparently it stays the same until you are 21. Not obeying its rhythms could lead to health issues and stunt your academic growth.

For those of us who suffer from a lack of concentration in the mornings, there's now an obvious reason. Our brains aren’t awake yet! It’s recommended that we do brain training before school but most people haven’t got enough time. Once we've got dressed and made sure we meet the uniform expectations, then eaten breakfast so that we're healthy and checked that we didn’t miss any homework that loaded on Firefly over night because the internet crashed, there's only just time to run frantically for the bus!

Former head teacher from Oxford, Professor Kelly, said that schools across the country should start later to “Improve learning". The sleep deprivation from a combination of late nights and early starts has a detrimental effect on children’s mental health.

Some schools have changed their school day to reflect teenagers sleep patterns. The UCL academy was the first school in Britain to change to allow the pupils to ‘fully wake up.’ The teachers and the pupils are benefitting from this change, students find it ‘easier to concentrate’ and teachers find it ‘easier to teach well rested teenagers.’ How it fits in with the average parent's working day might be a whole other issue though...
Lily Britten, Y10
Powered by

Create your own unique website with customizable templates.
Photo used under Creative Commons from raspy_hen
UA-121891675-1