Fantastic Beasts and their mythical significance 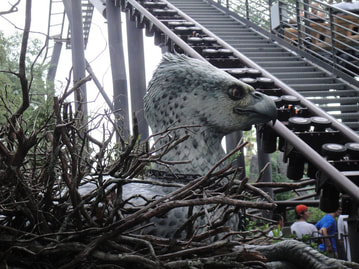 Harry Potter is easily one of the most successful book series of all time. Ever since the first book, Harry Potter and the Philosopher’s Stone, was published in 1997, author J.K Rowling has become one of the most popular authors in the modern age. And with the new movie Fantastic Beasts and Where to Find Them, and its sequel Fantastic Beasts: The Crimes of Grindelwald scheduled to come out November 2018, it would would be appropriate to talk about one of the things that makes this franchise so memorable…the ‘beasts’.

The beasts are perhaps the most memorable aspect of this franchise. They range from the most popular, such as Buckbeak the Hippogriff, to least popular such as the Blast-Ended Skrewts. Their popularity comes not from their design and backstory, but because most of them have been seen before in other stories that you may have heard of.

Hippogriffs have been seen in mythology before, but the most memorable story is from The Matter of France, which is a collection of mythical stories originating, as the title suggests, from France. One story tells of Astolfo, the twelfth paladin of Charlemagne and said to be the most good-looking of all the paladins. He obtained a Hippogriff from his friend Ruggiero.

Some beasts are more obviously from mythical stories than others. Take, for instance, the Dragons. They have been seen in multiple stories around the world from the fire-breathing, maiden-snatchers of Europe and the elegant sages of Asia. They are so significant in China that some skyscrapers have square holes in them, so that dragons can pass through after leaving their home in the mountains. Even Aztec tribes tell of Quetzalcoatl, a deity turned into a dragon when she drank poisoned wine. They even referred to her as the “Feathered Serpent”.

The Acromantulas are giant spiders in the Harry Potter world. And spiders are everywhere in mythology; some cultures see them as a symbol of protection. In Egyptian mythology, spiders are associated with the goddess Neith, who is believed to weave destiny. The same can be said of Ishtar in Babylonian myth. But easily the most memorable is from Greece, and tells of Arachne. Arachne was a queen (or in other stories, a Shepard’s daughter) who could weave very well. One day, she made the fatal mistake of boasting that she could weave better than Athena, the goddess of wisdom, war and crafts. Athena heard her and challenged her to a “weave battle”. In some cases Athena wins, in others Arachne wins, but it always ends the same. Athena, in her anger at Arachne, turns her into a strange spider hybrid, by making her bottom half that of a spider’s.

In Harry Potter, some creatures are depicted in a different way to how they are shown in traditional mythology. Take, for example, the Mermaids. In The Goblet of Fire, Harry has to complete his second trial of the ‘Triwizard Tournament’ in a lake full of deadly mermaids whose aim is seemingly to kill the contestants. And at first, Mermaids were considered a danger to people. They would supposedly lure sailors to doom with their beautiful singing. They were also referred to as Sirens. There is also a similar British myth of the Selkies, which are seals that can shed their skin to become a beautiful woman.

Last but not least come the Centaurs. These are creatures which are half-human, half-horse. They are found commonly in Greek mythology and there are many stories about them; there is one depicting a war between the Centaurs and the Lapith, a tribe of legendary people. But there is a single Centaur stamped throughout Greek mythology: Chiron, who supposedly trained many of the famous Greek heroes such as Achilles, Atalanta, Theseus, and Jason, and in some stories, Heracles/Hercules.

This is in no way a complete list. If you’re interested, feel free to do your own research on other mythical creatures and see if you can link them to Harry Potter or even other stories. Now you know a bit more about JK Rowling’s magical creatures, perhaps it will make you even keener to see The Crimes of Grindelwald when it comes out!

Will Bell, Year 9
Powered by