To eat meat, or not to eat meat -
the big Vegetarian question
​ 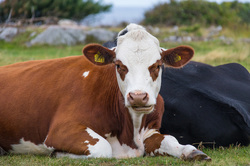 Why vegetarianism? Morgan Till and Louisa Dollimore explain their choice...

I suppose I’ve always been a great lover of animals and have experienced a sustained level of disgust towards eating creatures I feel such empathy for. It was this year that I was truly exposed to the horrors of intensive animal agriculture and was consequently moved by it. The torture that most animals endure just so that we can stuff our faces is abhorrent. For me it was less a matter of murder and more a matter of suffering; such repugnant welfare standards resulted in no choice but to give up meat for me.

I watched a video in my Environmental Science GCSE class on the appalling treatment of animals in factories. It really was hard to watch; sort of like those horror movies where you want to look away but can’t. It showed how male chicks are shredded alive because they are useless to the egg industry and are not the breed of chicken used for meat. Female chicks are ‘debeaked’ at a few days old with no pain relief in order to minimise damage caused by pecking one another. Everything is about profit: animal welfare comes a definite second, because, in the meat industry, money is all that matters.
I realised I wasn’t prepared to take the risk that the animal I was eating lived the torturous life or suffered excruciating death that many do.

What else influenced your decision?

Well The Smiths are my favourite band – one listen to their 1985 album titled ‘Meat is Murder’ and I was filling the trolley with Quorn. Other great artists like Slaves and Kate Bush are partial to a veggie rant also. One huge factor for me was the environmental aspect. After taking Environmental Science GCSE my life was changed profoundly, and I realised how important it was for me to give up meat in order to reduce my carbon footprint. Partnered with the fact that we could feed the world twice over with the grain we give livestock and I was compelled to quit and simultaneously save the world.

Eating meat is really bad for the environment. One of the main causes of the deforestation of the rainforests is cattle ranching for beef. The tropical rainforest is a huge habitat for loads of different species: in fact, 25% of our modern medicine was discovered from plants there. We’re destroying cures. The rainforest also plays a crucial part in absorbing greenhouse gases and regulating the water cycle; without it, climate change and flooding increases. This has a direct impact on those in poverty because they live in the areas with poor or no flood defences.
There are also more food miles if you eat meat: food for the animals has to be produced and transported to the animal, and then the animal goes to the slaughterhouse and various other places to be treated and packaged.
If you’d rather continue eating meat but want to limit the negative impact on the environment, please buy locally sourced produce. There are lots of helpful labels to look out for such as the Red Tractor and The Lion Mark which both guarantee the food was produced in Britain.

What would you say to those who are considering it?

I would tell them to make the change as soon as possible – it’s one of the best decisions they’ll make in their young lives. After changing I feel happier and more energised and concurrently have less of a risk of developing cancer, heart disease and dementia. Contrary to common opinion there are plenty of tasty meat alternatives out there and a wide range of vegetarian culinary experiences to be had. Almost every food outlet now offers meat and dairy-free alternatives. I won’t lie – if you’ve eaten meat for your whole life then you probably will experience a mild lust to consume it at some point, but just stay strong.
Louisa:
It’s easier than you think it’s going to be. Going pescetarian may help as you can continue getting protein from fish (that are sustainably sourced) while learning new recipes. If you feel like it, you can gradually fade fish out, but this isn’t so important as it’s easier and generally cheaper to find sustainably caught fish than it is to find animals that had a good quality of life.
Also, you don’t need to rely on meat substitutes like quorn if you don’t like it. It quite useful just to add substance in small quantities, but it won’t add flavour. There are lots of easy vegetarian recipes online which demonstrate how to get flavour in other ways.

What do you say to those who criticise you?

I receive a lot of criticism regarding my abstinence from meat and most of it is the fact that apparently I’m defying millions of years of evolution. Not only can the body survive happily without meat (surely that must defy evolution?!) but I personally believe that destroying the planet, replacing majestic vegetation with outlandish metal structures and the many genocides of our own species and others aren’t really what we evolved to do. Now that we have wiped so many beautiful organisms off the face of the earth I think that we have the moral obligation to be as ethical as we can be.
​
Louisa:

I get it. Humans are carnivores. (You have no idea how many times I’ve heard that since I became vegetarian.) I agree - we’re born to eat meat. But at the same time we’ve advanced from times when we hunted for our meat and killed what we needed to survive. (That was a time when the planet was in a much better state.) There are plenty of alternatives readily at our fingertips, all we have to do is try.

Create your own unique website with customizable templates.
Photo used under Creative Commons from Infomastern
UA-121891675-1