The Heathfield Vine shines at the National School Media Awards 2019 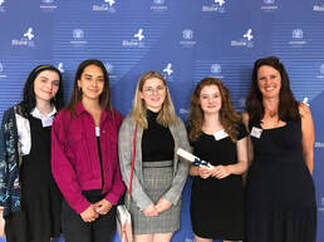 Our student journalists have been rewarded for their fantastic efforts at the 2019 Shine National School Media Awards in London, winning a Highly Commended runner-up place in the Best Online category, against a highly competitive field, and gaining three other nominations for the team.

Judges of the Best Online Award, which was sponsored by Google, praised the ‘wide variety of topical subject matter’ and described The Heathfield Vine as a ‘great project’.
‘It was a wonderful recognition of the talent and hard work that goes in to producing The Vine,’ said Ms Savage, who supervises the editorial team. ‘Our Editor Louisa Dollimore has put her heart and soul into the role over the past two years and thoroughly deserves this commendation for her efforts.

‘We were also delighted to be able to take our outgoing Deputy Editor, Abs Epstein, as well as incoming Editor Georgina Sharma and incoming Deputy Amelia Lorrimore - all three of whom have contributed brilliant articles over the years.’
The Award Ceremony, which was largely dominated by independent and selective schools, was held at the historic Stationers’ Hall in London - home of the Worshipful Company of Stationers and Newspaper Makers since the 15th century.
Throughout the morning, the four students took part in small workshops with professional journalists, before a keynote speech by celebrated journalist Bryony Gordon, who writes extensively about mental health and young people.

Chair of the Awards, Alison Strachan, reminded the nominees of the enormous power and responsibility of good journalism. ‘The right words can change lives,’ she told them.
She praised all the competitors for their efforts: ‘Everyone here has worked as part of a team. You have all excelled and should be very proud to have achieved a place at the Shine Awards Ceremony.’
The Heathfield Vine was shortlisted in four separate areas: Best Online, Best Feature (for Louisa Dollimore’s article on the Climate Crisis), Best Homepage and Most Inspirational Teacher.
​
Determined to keep growing from strength to strength, the team would love to hear from any students interested in redesigning the website or contributing photography and artwork, as well as those keen to write articles.

A note from Louisa Dollimore, editor 2017-2019
“Attending the Shine Awards was such a fantastic way to finish these two years as editor of The Vine. Having the newspaper shortlisted for the first time last year, and then Highly Commended for the first time this year, has made the hours of editing and the work of the team thoroughly worth it. When I took on the role in Year 12 I never imagined how invested I would become in the paper - or that it would become something I would find so hard to leave behind when I left Heathfield. Having left it at such a high point, though, makes me so excited to see where it goes. And it remains in the hands of Ms Savage, who received a thoroughly deserved nomination for ‘Most Inspirational Teacher’ at the awards on Monday, and without whom the paper wouldn’t run. She puts a huge amount of time and care into everything she does as a teacher, including overseeing The Vine team: I know the paper, with Georgina Sharma taking over as editor, will only continue to improve in the years to come. I wish the best of luck to the new editing team, and hope there will be more success at the Shine awards, and in general, in the future!”
​
​
The Vine team meet at lunchtime on Mondays in Room 13. For more details email csavage@heathfieldcc.co.uk or gsharma13@heathfieldcc.co.uk