When will we stop fighting feminism? 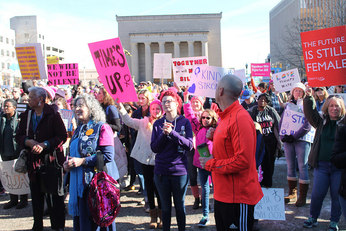 From Hollywood to Parliament, everyone has been taking a second look at sexism and sexual harrassment. With the recent #timesup movement, women - and men - have been uniting in solidarity against the inequalities that still exist, particularly in the entertainment industry.

Since the public shaming of Harvey Weinstein, stories of sexual harrassment have been pouring out, particularly with the widespread #MeToo campaign. The hashtag has reached many people, and prominent figures - such as Lady Gaga - have been speaking up about their experiences. Shocking accounts are being shared from unexpected sources, reigniting the debate about what feminism means in the 21st century and exposing the negative attitude that still surrounds the 'f-word'.


There are some pretty clear inequalities in this world, and feminism is attempting to address some of them. It’s not perfect - it’s nowhere near - but that doesn’t mean its flaws are more important than its successes. Every self-proclaimed feminist is examined in excruciating detail. When one makes a ‘mistake’, the media latches on, eager to fuel the anti-feminist fire. When Beyoncé named her fifth world tour ‘The Mrs Carter Show’, sure, we all let out a little sigh. It was disappointing to see the successes of such a powerful woman put under her husband’s name. But isn’t it far more important that she has already shown young girls they can be successful and still have a political opinion at the same time? Mrs Beyoncé Knowles-Carter is a proud feminist, and only too ready to tell girls they can “run the world” – her role as a wife and a mother should not diminish this. Emma Watson – queen of He for She – has been ridiculed and reviled by those seeking to discredit her ideas for taking part in a Vanity Fair photo shoot. If the critics are to be believed, the fact that she has allowed her body to be photographed eclipses all the political contributions she’s made towards gender equality.

It’s a little mind-blowing that, even now, for some people, feminism seems to be considered a much more destructive societal construct than, for example, misogyny. Misogyny is just a part of everyday life: bring it up in conversation, and maybe there’ll be a shrug, a murmur of dissatisfaction - but generally it’s accepted. Rarely do people engage in frankly vicious internet battles over it, or feel such overwhelming hatred for the word as is felt about feminism. Mention it on social media - if you dare - and be greeted by a torrent of angry conservatives defending their human rights; rights which are, of course, being infringed somehow. Feminism is taken as an attack upon the right to free speech and opinion - what an irony that people do not realise that it is, in fact, a defence of these things. It’s almost amusing that those who so aggressively criticise it often become parodies of the ‘feminazis’ they claim to hate: screaming dementedly at anybody who dares voice thoughts that are not in line with their own.

Feminism should not be a huge or controversial political statement in the 21st century. The fact there’s an internet explosion every time an influential person announces their support only serves to alienate more people from what is, essentially, a mutual agreement to oppose sexism. Let's not forget that former Prime Minister David Cameron refused to wear the 'This is what a feminist looks like' T-shirt, even while the other party leaders (Nick Clegg and Ed Miliband) did. The trolls would have you see feminism as a brand name for crazed women; it therefore comes as no surprise, but only disappointment, that only a minority of open feminists are men. In an almost laughably ironic way, women alone aren’t listened to: it takes men speaking up as well to get the issue heard. With women suffering at the hands of everyday discrimination, it is logical that men are needed to combat the problem too. Equality has to be something we all fight for together.