Schools across the country unite in demand of fairer funding 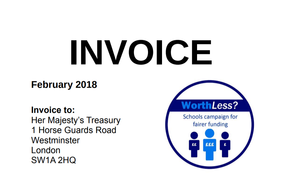 School funding has reached critically low levels, according to a joint letter from headteachers across England. The Worth Less? group, made up of 5500 schools over 32 counties, have addressed Chancellor Philip Hammond in their protest against a “chronic lack of funding” for education. Some areas have been affected more strongly than others; the letter states that if all Worth Less? schools were funded at the same level as those in the London borough of Hackney, in proportion to student numbers, the government payments owed “would exceed £5.5bn”.

Disparities in funding between areas can amount to £2000 per pupil, a difference of £2 million in annual income for an average secondary school of 1000 pupils. This unfair allocation of finance results in some schools being severely disadvantaged. As a part of the campaign, counties have released “invoices” for the money that they believe is due to them, using figures based on their average school funding in comparison to the borough of Westminster. In East Sussex, this is an eye-watering £107 million. These “vast” differences are having a detrimental impact on both primary and secondary education.

The new education secretary, Damian Hinds, stated, “There is more money going into our schools in this country than ever before.” Similarly, a Department of Education spokesperson responded to the school funding campaign by commenting that “there are no cuts in funding”. While it may be true that, in cash terms, government spending is higher than in previous years, this does not account for inflation and rising costs. Statements like these avoid answering the premise of the schools’ concerns - they are misleading and, as the headteachers’ letter describes, “superficial and inadequate”. It is unclear why the government seems so set on working against its own education system. It appears to employ a policy of denial when it comes to the situation in many schools; if funding is increasing and standards are rising, then why are schools becoming increasingly reliant upon “voluntary parental contributions” to maintain finances? According to the joint letter, “£146 million has been received” from this source of funding. Our schools are fast becoming the charity cases of the country - and Mr Hammond isn’t donating.

The consequences of schools’ financial situations are notably serious. Ms Barlow, Heathfield’s head and chair of the East Sussex Secondary Heads Group, commented that despite the fact all children “sit the same examinations”, they aren’t given equal opportunities due to the disparities in funding. Schools are being “starved of resources for the sake of other agendas”, meaning they are forced to cut back on crucial areas. Ms Smith, head of History at Heathfield, reflected on how she has to “carefully weigh up” where her resources go. Even printing wider reading materials is restricted; in an essay-based subject like History, this is understandably frustrating. Ms Smith concluded that “it comes down to the quality of the students’ overall study experience”. As a result of persistent lack of funding, this has “diminished in recent years”. In addition, our school’s GCSE and A level options have been cut in recent years; subjects such as Politics are no longer offered.

Reduced financial resources are having an impact on every department, but more so on arts subjects. When faced with the prospect of increasing class sizes and the need to reduce costs, the arts are being pushed out of the curriculum. Mr Marrows, one of our Music teachers, expressed his deep concerns with the prospects for both his subjects and others, commenting that it would be wholly wrong for “music to be reduced to a pastime solely for those who can afford to have instrumental lessons”. In the past eight years, the number of Music teachers has fallen from four to two. Ms Barlow reflected that there is a “social responsibility” to invest in the funding of arts - but with available funds so dramatically reduced, this proves very difficult.

The government is refusing to invest in the future of its young people. While it may insist otherwise, there is a crisis in classrooms across the country as a direct result of lack of funding. Perhaps it is time for some of the country’s leading politicians to return to school. They might learn about the importance of investment in education - if only they could still study Politics.