Hamburg: a city with an appetite for life

As soon as I landed at Flughafen Hamburg I was greeted by my friend, Sophie and the most delicious pastry you can imagine. Franzbrötchen is Hamburg’s sweet speciality. It is a sugary buttery pastry filled with cinnamonny yummiest. So my first tip on becoming an honorary Hamburger is to eat as many franzbrötchens as humanly possible because they are delicious and they are part of the city’s heritage.

Hamburg is situated in Northern Germany and as Germany’s second largest city and biggest port it certainly has a lot to offer. Due to Hamburg’s location, next to the Elbe River, the city’s range of food used to rely heavily on the fish from the river, however as time went on, the cuisine became more diverse and engaging as more interesting spices and exotic foods were imported. A traditional German dish that has its different variations depending on which part of Germany you are in is the Kartoffelpuffer. These potato pancake dishes can be eaten sweet or savoury (both are very appetising) as part or all of the main meal.

If you are eating out in Hamburg you will need a drink too. As well as Reeperbahn (clubbing / bar area) there are many drinking places spread all around the city. If you want to see German beer-drinking at its finest my second piece of advice to becoming a Hamburger is to go to the Hofbrauhaus, a pub where they serve a litre of beer in a huge beer glass. Every Hamburger goes there (at least that is what I am told.) If you fancy something a little calmer, you can travel down to the harbour, one of Hamburg’s most famous spots, where there are many small businesses where you can have a coffee and watch the hustle and bustle of port life.

The harbour is Hamburg’s pride and joy. The old town, Speicherstadt, is the largest warehouse district in the world where the red-bricked buildings stand on timber framings above the water. The district is surrounded by what are known as fleets - canals that are flooded depending on the tides and can then also be travelled by ship. Hamburg has so much history and culture there is something for everyone. It is also a very popular place for media as it is home to the NBC (Germany’s equivalent of the BBC). Hamburg also produces many of its own magazines and daily newspapers.

Tip number three for becoming a local is going to see a musical or gig or take part in a festival. Hamburg’s entertainment scene is very strong as it is a stage for many musicals such as The Lion King, Dirty Dancing, Billy Elliot and Rocky. There are many festivals and music gigs dotted all around Hamburg especially near the Alster (a big lake in the centre of the new town). Hamburg’s zoo, Hagenbeck, houses over 210 different species of animals while Hagenbeck Eismeer is home to Arctic visitors.

HafenCity is Hamburg’s newest developing area. Currently HafenCity is the largest development project in Europe, and its figurehead is the Elbe Philharmonic Hall (Elbphilharmonie). Hamburg's new 'transparent' concert hall. It is said to be an ‘international inspiration.’ It has designs to become Hamburg’s cultural heart with many theatres, concert halls and market places being build.

My final piece of advice to become a Hamburger is to enjoy yourself. The people there are so fun and full of life you will never have a dull moment. Everyone I met is kind and welcoming and they are always ready for a party. Hamburg has so much going on and some genuinely beautiful sights I can’t think of a reason why you wouldn’t want to visit. 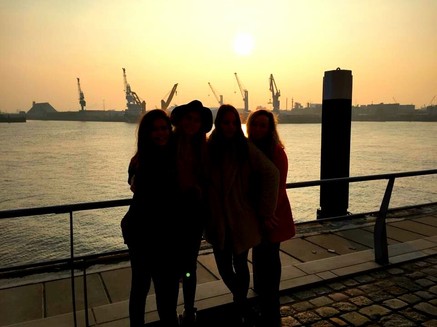