The slow silent comfort of snow 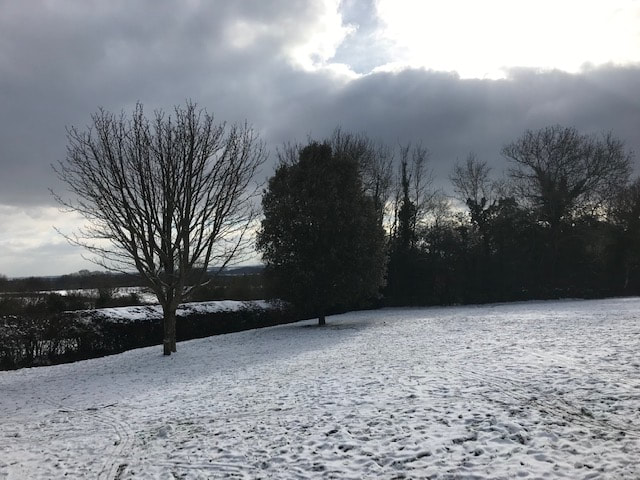 Hivda Aydogan finds comfort and joy in the cold snap
​
As I write this it’s half past midnight, and the snow is covering our roof in crystals. I think it’s the most beautiful thing I’ve seen in a long time.

Up until now, my brain has been filled with restless thoughts about how to get through the school day – and I know there are so many people who are no different to me. I know we spend most of our days and most of our nights stressing and worrying and driving ourselves crazy with the thought of everything that going on right now, teachers, students and wider members of society alike. But we have every right to do so. Next month marks the one-year anniversary of our collective relationship with Covid19 – which, might I add, is probably the most toxic relationship ever to be written in history. But we’re still gruelling on through it, right? There are people among us who are sure they have hit rock bottom. There are people among us who are sure they will never recover from the effects of what has happened to us – but I want this to be a reminder that even if this is the case, we’re strong enough to find ourselves again. And weirdly enough, I find myself in the snow.

I love the rarity of it. Snow brings a special kind of happiness – throwing a snowball at someone’s face cannot be compared with the happiness that you feel just sitting around on a nice, warm summer's day. It’s different. It’s special. We don’t even feel it every year. Snow creeps around silently and stealthily, hiding when we are most certain that it will reveal itself, and appearing at the moments we least expect it – and in that, I find the beauty. To expect something and for it to happen gives a sense of satisfaction. To be surprised by something brings you joy.

I love the mystery of snow. The way it comes and goes as it pleases, deciding the exact moment in time it gets to jump up on us. It’s such a simple thing to me, but so breathtaking too. We are mesmerised by white starry flakes floating down from the sky. We stare at it in awe, even those of us who hate the cold will smile upon seeing it and just crawl back to bed – leaving their curtains open. Why? Because it’s the most beautiful thing to watch, whether we notice it or not. The way each and every speck of ice drifts down hypnotizingly, the way the town we once knew as green and colours of the Earth’s soul is slowly covered in only one shade.

I don’t get tired of watching it. It’s the strangest thing – how the coldest creation makes me feel the most warmth. It makes me want to sit and write for hours and hours about a small, hidden town blanketed in white, about the people within the confines of it, about how it suddenly feels like we’re living in something out of a story. It makes me forget the virus ever even existed at all. It makes me think Covid never happened, that we are just people in a bubble of ice, snowflakes decorating the place like we’re in one of those ornate snow globes. The ones you shake and out of nowhere the snow starts falling softly to the bottom. Maybe someone gave our town a shake, and that’s why we’re suddenly transported into quiet. Almost silence, but not quite. Just calm, soundless peace echoing through the streets. Even as some cars trundle by, as some people walk by, as some voices make up mindless chatter in the background, there's a quality of stillness. The feeling of breathlessness, the freezing cold wrapping its arms around you from head to toe, starting at the tips of your red stained fingers and swirling around like strands of ivy; the numbness of the tip of your nose and your cheeks. The feeling of the ever gentle, ever brutal winter blowing its icy breath throughout the town, and onto our faces. The feeling of soft specks sinking into your face and burying into your hair and clothes. The feelings that make me forget that anything ever went wrong in this world at all; that make me forget what could possibly have made me feel so stressed and upset. For this moment, it feels that we’ve always been like this: a little town under a white duvet just reliving the same day over and over again, but never getting tired of it. For this moment, I forget I wanted to venture out of here and do something big. For this moment I am simply happy and satisfied to just stay here, under the safety of the white blanket forever and ever and ever.

The only problem is that the snow melts. And with it, so does the quiet silence that I found in it. So does the peace. And I am left with nothing, so I console myself with the fact that at least it was there. At least I felt it. At least I know where I get my happiness from. I have taught myself to love the rarity of it, the mystery of it, the silence it brings as it creeps up on us. Yet if we had peace forever, if we were to feel this warm quietness forever – then we wouldn’t know chaos. And we wouldn’t take pleasure in the few, blissful moments of peace that we managed to find, because it would already be there. It would devalue the serenity it gives whilst being surrounded by a raging storm for almost a year.

Do you know what the snow did? It let me breathe. The snow let me breathe properly for the first time in a year. As if I deserved it and as if the world had stopped just for a moment.  Just like it covered the town, the roads, the rooves, the fields, the chimneys in white, it covered my brain too.

So that’s where I found my peace – something I was sure I had lost forever every time I stared at the mounting pile of work I had to do. Something I was sure I wasn’t going to feel again as the only feeling that took up the space inside me was fear. I revelled in the snow for those moments; I let the quietness soak up in me until I couldn’t think of a single reason to be upset. Soon, I will read this back and ache for that feeling again. But like I said, the rarity is what makes this so special. The fact that it’s not always going to be there for sanctuary.

I promise you, even though it seems like we’re whirling round at the speed of light right now, the Earth will stop turning for you at some point and give you your moment of peace too. Just for a few days, a few hours maybe, but it will. Take this as a reminder that you will find your peace. Perhaps in making someone laugh after they cried, perhaps in sitting round a flickering fire with those you hold dearest, perhaps in dancing under a glowing streetlight in the dead of night.

I found my silence in the snow.