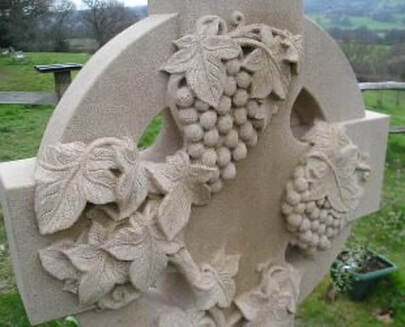 Producing meaningful memorials to enable people to commemorate their loved ones is all in a day's work for Eleanor Walters' dad. She asked him to tell us more...

So what exactly do you do?
My job is Memorials Manager for Burslem Memorials, so we make and restore memorials for anybody really. So most of the work is for the general public, for memorials for cemeteries and churchyards. But we also restore and build new war memorials and plaques for museums, anybody that wants it really, schools sometimes.

What's your daily routine?
Well, it depends, my role is to oversee everything in the day-to-day business, so I'll be first of all checking emails, seeing what's come back from clients, and that kind of thing. I will check in with our masons, who actually do the physical work. I allocate the work to them, so ensuring they are happy with what they've got to do, that everything is going smoothly. I check in with our letter-cutter, if he's doing any work that day. Then it will either be getting on to doing some quotations, so sending clients quotes on what will we charge them to do a job. We have appointments with clients, so I will be meeting them and finding out their needs. Sometimes I'll be going out to site to look at jobs we've done to make sure they are okay.

What's your favourite part?
I think it's nice when a client will come back and say that what we've done is really good, because memorials can mean a lot to people and it can be quite difficult sometimes for people to go through the process of commissioning one. So it's quite nice when you've gone through it. It takes quite along time as well. It can take several months up to a year for the process, so that kind of feedback at the end is probably the nicest part.

What's your least favourite part?
You always try and do your best, but things occasionally go wrong. It's hard to say exactly what that'll be, but it's when you turn up in the morning and your masons say 'Oh', you know, 'You need to look at this'. When something has gone wrong that you weren't foreseeing, but you then have to sort out. But we do our best to make people happy and we're pretty good at it.

Would you recommend it as a career path for someone else?
Well, the only thing that's constant in life is death and taxes! Before that I was doing a very very different job, but it is a job where you can see through a project with a client, and it's nice to have that kind of conclusion on a project. Going along the journey, and then hopefully working out what they want. Sometimes they don't know and need a bit of assistance, and then delivering it, so it  gives satisfaction like that.

What's been the most fulfilling thing that you've worked on?
Some that are quite nice to do, we've done a number of plaques that are in the foreign office in London, and they are for British officials who have lost their lives overseas, usually in places of conflict. They're often quite young and it's quite nice that we are able to at least provide some commemoration for the individuals, that is going to be there on a permanent basis in an important building.

Any final words of wisdom?
You always have to have respect. Memorials aren't for the person that's died, they're for the people that are still living. They're the ones that have the emotional involvement with it, so you always have to be very respectful.