Deprivation in the homes of Britain: a humanitarian crisis 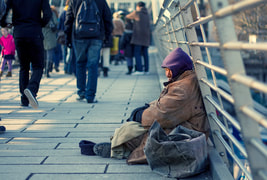 When you think of countries where millions are living in poverty, what’s the first thing you think of? Countries torn by war or famine? Countries affected by drought or disease?

It’s unlikely that the first country to come to mind is the UK. Yet a recent report from a United Nations representative found that poverty is at alarming levels in our country.

Consider this: 14 million people are now in poverty. A fifth of our nation’s population. This is a tragedy.
But the UN report only gets worse. Every day, all across the country, there are students like you and me, all with their own worries : friends, relationships, studies. How many of them do you think are worrying about money? Perhaps all of us should be, with the report claiming almost ‘one in two children’ live in poor households. This is clearly a disgrace in what we like to think is a civilised nation.

What’s more, with a constantly increasing population and lack of housing, homelessness has grown by 60%, and with rough sleeping has more than doubled. Nobody should be allowed to live this way; nobody can deny the horror and harm that this does to human beings.

There are always some who argue that the poor or homeless have brought it on themselves. This is an easy way to brush the problem off, but far from the truth. To add some perspective, while a significant portion of those in poverty were once better off, the switch from comfort to poverty can be breathtakingly fast. Most are forced into their downward spiral by a single crisis: the break up of a marriage, an abusive home, sudden unemployment, or an illness or disability. Not only that, but children are frequently born into poverty — or forced into it if they run away from an abusive home. Many young people are forced to begin adult life in poverty through no fault of their own.

Take a moment to think of all the destitute hundreds and thousands that the report identified. Of the millions classified as living in poverty. What can we do to help?

If you feel moved to make a difference, there are so many ways to contribute: whether getting active in a fun run for a charity, collecting spare change for a charity such as Save the Children, or even just donating to a local food bank. There are so many ways of helping and such a need to get together and put our effort into making a difference. A little effort can go a long way ,and the poor and homeless of Britain need our help.

Create your own unique website with customizable templates.
Photo used under Creative Commons from shando.
UA-121891675-1