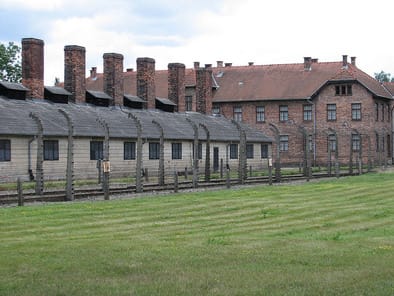 On Thursday 3 November, we flew to Krakow airport with the Holocaust Educational Trust, and headed to visit the Polish town of Oświęcim - although people will be more familiar with the name it was given during Poland’s German occupation: Auschwitz.

There is no easy way to summarise the emotional impact of visiting such a place as Auschwitz. The sheer volume of emotion we felt could best be described as overwhelming, but that would be an understatement. It was not simply overwhelming; the horror of what we saw on that visit stripped our emotional capacity back, so that all we were left with was our instinctive reactions to what we were witnessing.

During our trip, we visited three different places. The first was the Jewish Cemetery, which was utterly deserted. It was the feeling of coldness that went beyond the wintry temperature outside, and it reflected what had happened in this town of barely 45,000 inhabitants. Before the war and German occupation, over 50% of the population was Jewish; now, not a single Jewish person lives in Auschwitz.

To us, the trip to this site seemed strange at first. Why would we visit an old, abandoned cemetery before the camps? However, it quickly became apparent that the impact of the Holocaust went far beyond the horrors of the Death Camp. Even those that had already died before the war began were treated as nothing more than pests, as we soon realised when the disordered system was explained. When the Nazis were in control, they desecrated this site by taking gravestones and using them to line pavements and hold up the banks of the river. It was only through the work of a few Jewish survivors that some remains were returned, though many were broken beyond repair and no stone was in the right place.

The impact of the Jewish cemetery was magnified partially because every other cemetery we saw whilst on the journey to the town of Oświęcim was a celebration of life: bouquets of flowers and lanterns were positioned on every tombstone, which not only added colour but also a unique sense of remembrance.  It was clear that anyone buried in these cemeteries had a great deal of effort put into remembering them. Therefore, to arrive at the Jewish cemetery had a striking effect on us. On walking into the graveyard the impression was one of abandonment. Not only had their tombstones been pillaged and destroyed by the Nazi soldiers, but these people were stripped of their legacy. We were outraged. This determination of Nazi soldiers to destroy a culture was horrifying. It is incredibly difficult to put into words what emotions the haunting and forgotten atmosphere evoked, but it became clear to us that what was to come would be more challenging to face.

We then visited the first camp of Auschwitz (Auschwitz I) and, as we walked underneath the towering gates, our eyes were drawn to the profound slogan in the wrought iron: Arbeit Macht Frei – its meaning was a lie: Work Sets You Free.

What we saw in Auschwitz I was horrific, in particular the artefacts. Despite the crowds and the noise of hundreds of people - as it is, in theory, a tourist site - it was shocking how alone we felt. We were each alone with our thoughts and feelings, despite being together. We couldn’t ignore the atmosphere of old fear – it was disgusting. It was as if we were following our guide on autopilot. Perhaps it was a result of having someone talking to us throughout the duration of this visit, not giving us a chance to stop and process our feelings, which made it easier to hold back the emotions at this concentration camp.  However, when we saw the piles of hair behind a glass case in one of the rooms, it was difficult to see that even after the Nazis had taken the lives of these hundreds of thousands of people, they still had a more to take for its monetary value and nothing else. Also, when you come face to face with the thousands of pairs of shoes on display, or the best crockery of each household, it was so painfully clear how they had been deceived. Everyone kept hoping for their opportunity to go home. Not only were their lives stolen, their hope was taken and used against them, and this destruction of hope was stomach churning.

Our final destination was the largest of the three camps: Auschwitz-Birkenau. Although we had all seen the well-known photo of the front entrance, which dominates the bleak landscape, there was nothing quite like walking in the footsteps of the people brought to this camp. Auschwitz-Birkenau was so desolate and so massive. Its main purpose was to kill as many human beings as possible. Well over a million people died in this terrifying death camp.

It is easy to empathise with the victims - both those murdered during the Holocaust and those that lived to tell their stories - and to be amazed with the stories of heroes who saved lives in camps like Auschwitz. However, it is crucial that we remember the other individuals of this tragic story: the bystanders, who did nothing to stop the atrocities, and the perpetrators, who carried out the most appalling cruelties. It is incredibly hard to see those we might call monsters as people, but if we are to ‘rehumanise’ the Holocaust, we must accept that it wasn’t monsters that ruined so many lives; it was human beings. They were people with families of their own, who loved and were loved - and yet they were part of something unbelievably terrible: the mass murder of a whole section of humanity, based on their religious and racial differences.

When standing in the same place these people stood 75 years ago, and learning the individual stories of people targeted during this terrible period in human history, there is little you can do to escape the overwhelming emotions.

Two stories we were told stand out instinctively when thinking about this trip. The first was about a woman who got a job working in the latrines, and although it was hard work and riddled with the potential for illness, she enjoyed it simply because she could socialise with people and talk. The story portrays the extremes people could go to in order to have a conversation.

The second story was about survivor guilt, and it was heart-breaking. At Auschwitz-Birkenau, on arrival, everyone was separated into those fit enough to work and those going straight to the gas chambers. When one particular man (only a teenager at the time) sent his younger brother with his mother during this process, as he was too young to join the line for men, he did not know he would never see either of them again. This devastated us. His decision to try to do what was best resulted in awful consequences.
​
Overall, the emotional impact is difficult to put into words. There is no way to sum this up or to understand the horrors faced by those in the concentration or death camps. There is no way to comprehend why this happened. We found it took at least 3 days for the visit to sink in, just because we were so shocked: shocked that it could happen, shocked that people could be murdered so ruthlessly. It’s safe to say we faced a whirlwind of emotion. But their end shouldn’t define the lives of the victims. They should be ‘rehumanised’. We need to remember them, and we need to make sure this never happens again.

By Amy Bigwood and Sophie Pope
Powered by

Create your own unique website with customizable templates.
Photo used under Creative Commons from greger.ravik
UA-121891675-1