Leading the left behind... 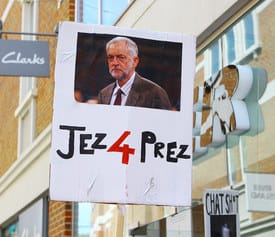 On 24  September, following a debate between the two party candidates Jeremy Corbyn (current Labour leader) and Owen Smith (Labour leader hopeful), members of the Labour party voted on who would be the next leader of their hallowed organisation. The former leader of the Labour party was subject to a vote of no confidence by an astonishing 80% of his colleagues in the Labour party on the 28 June, meaning he had to stand for re-election as Labour leader. This was accompanied by many resignations from his shadow cabinet, but these were also largely in protest against sacking shadow foreign secretary, Hillary Benn. Initially, the main opposition to Corbyn was Angela Eagle - the shadow first secretary of state - but she dropped out eight days later, leaving Smith with the herculean task of opposing Corbyn.

Overall, Smith’s efforts were for nowt. Corbyn won the election with 62% of the votes. He went on to claim that Labour could win the next general election and call for unity within his broken party. He is right to call for this, as the internal fiasco of Corbyn’s leadership being challenged and then returned once more has widened the split in the Labour party; many of Corbyn loyalists criticized Smith and his supporters within the Labour party about how they could wish for a stable party but plan to remain in opposition to their glorious leader, should he win. Now he retains the leadership - but can he bring the superglue they so desperately need to stick his party back together?

Corbyn will have a hard time winning the next general election. With regards to passionate party supporters he has been successful; he has increased the Labour party membership up to half a million and notoriously gained much of the support of the youth and the trade unions with his pre-Thatcher socialist ideals. But, unfortunately for our little friend, he cannot appeal to a majority centralist vote with his poorly thought out financial ideas, his defence policies (or lack of such) and his personal character (if you can’t survive 10 minutes at PMQs, you can’t run my country).  This isn’t to say Owen Smith is somehow the perfect leader, not by any means, but he would undoubtedly better unite the labour party and potentially gain more centralist votes then Corbyn, particularly of those who want a second referendum on Europe.

Now, I understand the support for Jeremy. The pride of Islington North has admirably stuck to his ideals all throughout his career; he has managed to increase Labour party membership to half a million and his socialist policies undoubtedly show his heart is in the right place, for example, he would like to put companies under a corporation tax and scrap tuition fees. But, for all these positive points, none of them are of any value in British politics.

Putting it timidly, (I understand that this article is part of a school newspaper and so, as the majority of comrade Corbyn’s support comes from young people, I fear I need to watch what I write), his ideals cannot be sustained in Parliament due to the financial state of the nation and the opinions of the majority of the public, no matter how long he has held onto them. As for the supporters he has garnered, they are fairly few and far between. As the nature of a party (or a leader) goes further from centralist politics, their supporters tend to make a lot more noise, but be in fewer numbers. Furthermore, because of the god awful voting system we have in the UK (a system which allows a party to have a majority in Parliament with just a quarter of votes) these passionate supporters will not get their voices heard and will not be represented. But, when you have supporters that actively bully your opponents (see Angela Eagle) no matter what you say against their actions, and members of the opposite party signing up to vote for you because they do not believe you will win an election…. you may want to reconsider your stand.
​
I would not have chosen Corbyn for leader of the Labour party. He wants to support policies which failed for a reason during Thatcher’s reign and, while I dislike the Conservatives, I would sooner vote for Theresa May than what Labour currently has to offer. We’ve run ourselves into poor situation in current British Politics, and until things change, all we can do is pick the best of a bad lot.