Bridging the gap between youth and age 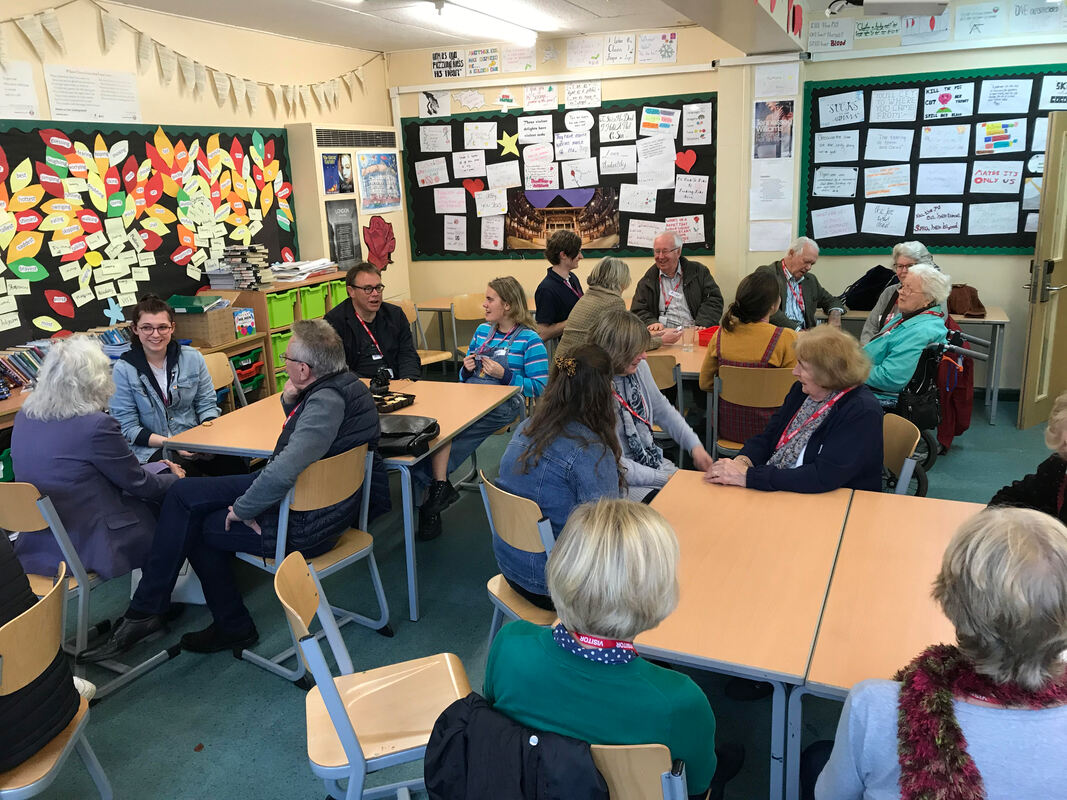 A brilliant new project to bridge the gap between generations is giving our sixth-formers the chance to write the life stories of older members of the local community. Seven students are involved and are beginning a series of interviews that will lead to hardback published books next Spring. Three of them share their first impressions of the project.

Eva Jeffery, Year 13
There’s a nervous energy to the air as we wait, the door open, straining to hear if anyone’s approaching from the corridor. A table laden with steaming tea, coffee, and a gorgeous selection of biscuits has been placed in prime position for our guests. The community organisation MAYFACs has invited the seven of us to take part in the LIFE WRITING Project – a journalistic project where students interview elderly members of the Mayfield community to uncover and preserve their stories. We’re all desperate to make a good impression, and leap to our feet when our guests appear in the doorway.

Instantly, smiles break out. The room fills with chatter and laughter as each interviewer meets their interviewee. I quickly spot my interviewee – Peggy Piers, dressed neatly in lavender clothes and with a twinkle in her eye as she approaches. She’s pinned an array of silver brooches to her lilac jacket that peek out at me when she settles herself at the table. We’re with another interview pair, and I sneak a biscuit from the box to nibble on between questions.

“Well, how shall we start?” asks Peggy, looking at everyone in turn and smiling. She has such a contagious smile and it eases the anxiety around the table immediately. Her voice is well-spoken and strong, a slight undercurrent of mischief to it, like she’s just waiting for the opportunity to laugh or tell a joke. Peggy reaches into her bag and pulls out a neatly folded piece of paper.
“I have some questions I got asked to prepare. I think you all have to guess which one of these three things is a lie.” There’s a quick scramble for everyone to find their own icebreaker statements and then we begin.

Peggy lifts her chin and reads out her statements; her son-in-law is from Canada, she has flown around the Statue of Liberty in a helicopter and she has danced with someone famous (whose name, sadly, means nothing to me, but has the other interviewee’s jaw dropped in admiration). We debate Peggy’s statements while she watches us carefully, hiding her paper.

“I love to travel with my daughter,” continues Peggy, “We go on cruises together. She used to be an airline attendant – that’s how she met my son-in-law, on a beach in Barbados between flights. He took the same planes as her just so he could meet her again!”

It would have been surprisingly difficult to get Peggy to talk about herself without the icebreakers. She seemed embarrassed to have the attention on her, but was eager to take part in the others’ stories and icebreakers. Her incredible smile hardly falls from her face the entire time. Eventually, our time is up, and we reluctantly have to part ways.

“I look forward to our next interview,” says Peggy. “I do hope you find me interesting.”
I reassure her that she is already fascinating, and she seems pleased, if a little doubtful. I, on the other hand, am certain this project is going to be thrilling with such a charming, joyful person as Peggy. Already, I have a wealth of precious information about her incredible life. She has so much to say, hundreds of stories to share and we barely skimmed the surface during our icebreaker meeting. I’m thrilled to dive into the LIFE Project and unearth more of Peggy Piers’ enthralling history over the coming weeks.

Tallulah Denholm, Year 12
This project consists of seven elderly people being paired up with a young person who will visit their homes and interview them about their lives; I have been paired with 84-year-old Sylvia. Once we have gained a suitable amount of information, we will write up all of the notes we have into a book dedicated to our partners. We have been prepared with three training sessions in which we learnt about safeguarding, how to approach our future interviews and gained some initial information about our partners.

Just before half term we finally got to meet our partner, having our first conversations with them and bonding over an ice-breaking game called 'Two truths and a lie'. Some of the truths were positively shocking! For example, one gentleman had been to a Bob Dylan concert so many times he could no longer keep track but he was certain it was well over 200! We will be meeting our partners every week for the next two months and we are all excited to learn more about them as we travel though this historical, social and literary journey.


Maezie Lane, Year 12
The Life Writing Project is an incredible opportunity to discover someone else’s amazing life stories and to find out about what life was like growing up in the past century. One of the reasons that I was so attracted to participating is the fact that it allows you to meet to people and develop your interviewing skills as well as having a book published with your name on it at the end! We are still towards the beginning stages of our projects and have just met out partners and I honestly can’t wait for the journey that is still ahead of us. I have this feeling that it’s going to be so rewarding and that, in many ways, our lives and understanding of the world will change for the better at the end of it.