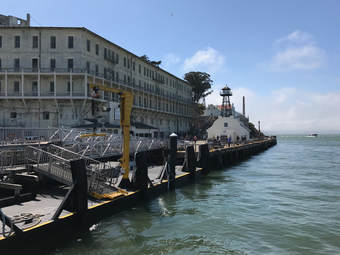 Photo by Jemima Smith
The boat cut effortlessly through the waves on the chilly Thursday morning. The sun glistened on the water but we were out in the open, exposed to the fierce numbing wind of the San Francisco bay. Thick icy white foam scarred the deep royal blue ocean water as we chugged along getting closer and closer by the minute. To the left of us was the great Golden Gate bridge, looming in the distance in the late July fog which crept its icy fingers over the hills behind, engulfing the rusted red cables of the famous landmark. The prison stood victorious and proud amongst the jagged rocks of the island which have since become a popular nesting spot. The surrounding rocks were covered in a white mass which seemed to move and sparkle as if the whole island had been covered in a layer of shiny silver. It wasn’t until we got closer to the island that we realised the glimmering mass was in fact thousands upon thousands of nesting gulls, each one patrolling their chosen spot like a guard.

The boat pulled up at the famous island and as we all unloaded off onto the hard concrete of the dock. The mightiness of the historic prison became apparent to us all. The crumbling building cast a dark cool shadow over the crowds of people who seemed nervous and hesitant to start the long journey up to the building. As we retraced the footsteps of some of the most dangerous criminals in history, the feeling of freedom from the bustling city of San Francisco slipped away. Though the vibrant city was only a boat ride away, as we trudged nervously up the steep concrete paths of the prison we all shared a feeling of apprehension. It was easy to see how the prisoners must have felt knowing this would be their new home for the rest of their long lives.
​
Any feelings of excitement or happiness we had about the opportunity to see one of the most famous prisons in history were crushed as we approached. The beige concrete walls seemed to touch the sky, each face of the building embellished with rows and rows of windows, each one covered with thick rusted metal bars, blocking out as much sunlight as possible. As we entered the building through thick steel double doors we were led up a narrow concrete staircase. I was left speechless and humbled as I turned the corner and found myself looking down an endless corridor of cells, each one smaller, darker and dingier than the last. The walls of each cell, painted a white colour many years ago that was now peeled and chipped, connected at each corner forming a perfectly shaped square room. A small, low metal bed frame in one corner, a lonely shelf above that which would have held the few belongings the prisoners had. The cells seemed colder than the rest of the building. It was hard to imagine what it would have been like living here, in this one minuscule room. The crowds of tourists dispersed and I found myself walking down one of the rows of cells alone, treading carefully as not to disrupt the crumbling history of this place. I felt isolated from the bustling city just beyond these walls, from the city that I was in only a few moments ago. I had only been on Alcatraz island a few minutes, but I could already feel my freedom being taken away from me.

The first breath I took after emerging from the cold, dim prison felt like the freshest breath of air I’ve ever taken. We made our way up a steep, crumbling staircase up to the prison yard. If you turned around, you could see the bright colours of san Francisco city; you could see the famous cable cars travelling up and down the precipitous streets. The wind was icy and violent, pushing us further onwards as we clambered up the steps. The prison yard was bleak. We were surrounded by solid concrete walls stretching five metres up towards the clear sapphire sky. On the far end of the yard was a wide set of steps. We were informed that this is where the prisoners would spend most of their time sitting, socialising and playing cards. Sitting on the cold grey steps, you just see the city. Almost as if they built the walls just low enough so the prisoners could see what they were missing out on. What they wanted most. Freedom.