Are the Oscars or Hollywood really racist? 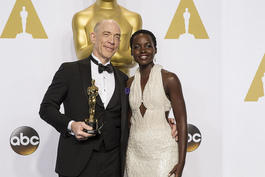 The Academy Awards ceremony, otherwise known as The Oscars, is an eagerly awaited annual event that is exciting for both celebrities and movie fans alike. The event honours achievements in the previous 12 months of film from acting to directing by nominating people for various categories weeks in advance and then announcing the winners at the ceremony.

The 88th annual Oscars will be held on 28 February this year but this year's event has raised some serious controversy. When the list of nominees for each category was announced in January, it was quickly noticed that the nominations were almost entirely for white people for a second year running.

Following this news, actress Jada Pinkett Smith, called on the world for a boycott of the 2016 Oscars, resulting in the popular social media tag “Oscars So White.” This spiralled into a number of celebrities who refused to attend the Oscars in revolt against this apparent modern day racism.

The large scale boycott has put the legitimacy of the Oscars into question as well as raising inquiries into Hollywood’s view of diversity, with people particularly scathing about the range of characters a black person can play in the film industry in comparison to others.

But are the Oscars really racist? Well, this year the film “Creed” was written and directed by Ryan Coogler and stars Michael B. Jordan as its main character, both of whom are black. Despite this, the only Oscar nomination was for Sylvester Stallone as ‘Best Supporting Actor’. Similar issues have been raised with other box office hits this year such as “Straight Outta Compton”, raising suspicions as to whether the Oscars are perhaps institutionally racist towards black actors.
Another controversial topic is the gender imbalance in the nominations. While there are separate categories for men and women in multiple different topics, the men tend to dominate the majority of the multi-gendered categories such as directing and cinematography.

If the reason so many white men are nominated is that most of the best roles in the industry – either in front of or behind the camera – are currently performed by white men – does this make it any more excusable? The issue arguably isn’t the Oscars at all, but the movie industry at large.  Or, is this just over-sensitive nonsense? Are we emphasising diversity when it isn’t actually relevant?  It’s a positive sign of the times that this is the first time news like this has affected the public so significantly. It shows that people are actively thinking that diversity matters.
​
It’s impossible to prove whether racism is at the heart of this issue. If the mostly-white, mostly-male list is simply based on merit and coincidence, let’s sit back and celebrate the successes of the industry - but if there is a deeper problem at work, hopefully this backlash and blockade through social media will force Hollywood to do some much needed soul-searching.