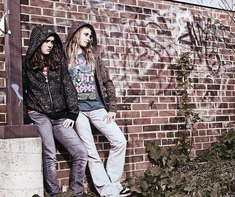 Due to common representations of the hooded, knife-wielding youth in the tabloid media, it’s no wonder that some older generations appear to fear anyone under 18. But before we get into why they are so scared of us, we need to diagnose their fears and recognise the symptoms. If you are an adult reading, and are curious to know what I am getting at, you may not know that having a fear of teenagers is an actual condition. This is known as ephebiphobia. In extreme cases, symptoms include anxiety, panic attacks, shortness of breath and even the inability to speak in a stressful situation. Woah - that sounds serious. In most cases, though, the elderly don't run for cover at the sight of a young person, therefore we can most likely conclude that ephebiphobia is not taking over the elderly. Pre-conceptions regarding young people, however, are still very much present in day-to-day life.

The other day, my brother and I were walking to school. We weren't causing any trouble and we were just talking about what our days had ahead of us. There was a kind-looking elderly lady coming our way, and just as we were coming closer, she dodged straight into a hedge.

Wait a minute…can we pause the story for just a second? She ran into a hedge? That may sound crazy, but it was completely true.

It was almost like she saw us coming and thought that any second we were going to pull out our black hoodies, switch on our black Bluetooth speaker and start blasting Eminem out of it, whilst our keen ﬁngers pull out a can of black spray-paint ready to vandalise the very ﬂoor our black shoes stood on, while shouting every expletive in the English language at pedestrians passing by. No. That was far from the truth. We were actually on our way to get to school early so we could revise for some tests we had later that day. Pretty innocent, right? So why was this woman so afraid of us?

It occurred to me that the elderly don't fondly give me sweets for holding doors open anymore. It made me think that maybe I wasn't the cause of the loathing and fear directed towards me, and that perhaps it was something else: stereotyping. Clearly what happened is that maybe a new youth centre was built in a small, quiet town, next to a retirement home. Slowly, more and more teenagers would come there to hang out and they started to swarm around it like pesky locusts. Because those in the retirement home did not leave much, they knew no other teens. Gradually, they began to believe this was what all teens were like and they grew a small fear to them due to the liveliness and loud noise of an unrepresentative few.

They may also care about Keeping up with the Kardashians than grandad's favourite TV program: the 4:00 ﬁshing channel but these are just different interests – it doesn’t make us different species.
Teenagers are not all the same and the majority care about not being placed in the dark, melodramatic stereotype of the 'teenager'.

Create your own unique website with customizable templates.
Photo used under Creative Commons from Gunnshots
UA-121891675-1