Gun violence in the era of Trump - will he ever listen? 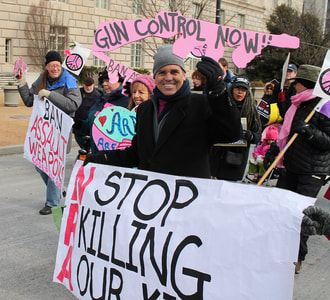 Why won’t Trump put forth a plan to ban, or at the very least minimise, the use of guns?

Recently, it has become difficult to determine what has featured in American headlines more often: shootings or Donald Trump. However, the two never seem to coincide. Trump is quick to suggest the banning of immigrants, who have posed no threat whatsoever, and yet, despite the mournful experiences his country has experienced due to gun-wielding maniacs, the topic of restricting the availability of guns rarely touches his tongue. Could this perhaps be because Trump knows all the gun-loving fanatics of America are those in favour of his presidency, and to make his country a safer place would be to put his position of power at jeopardy?

American gun violence is a serious issue that plagues the streets, shops and schools of the twenty-first century. It is undeniable that, despite being an advanced and innovative country that has dropped birth mortality to below 0.01%, the US is still unable to keep its people safe. America, land of the free, where one cannot go for a night out without fear of being murdered. Where children cannot go to school without the chance that they will be mowed down like insignificant blades of grass.

October 1, 2015. Umpqua college shooting. Ten teenagers dead. Nine injured. December 14, 2012. Those children – those children, who had not yet reached double digits - would have been writing their Christmas lists to Santa Claus when twenty of them were shot dead. Those children would have been starting secondary school if gun laws had been stricter. Perhaps they would be joining a sports team or excelling at Maths or English. We will never know. We will never know because, instead, there are twenty-five-feet coffins in the ground. Instead, there are mourning mothers, fathers, friends.

There are those that would argue, “had the teachers been provided with guns…” And to that, I will answer: if teachers were given guns, there would be far more accidental deaths - though I’m sure your preferred term would be ‘collateral’ - than lives would be saved. Already, the rate of accidental gun deaths in America is 600 per year. That is over four times the amount of total gun deaths in the United Kingdom.

American gun enthusiasts may, then, argue that such an accident would not happen in their households. That they lock their guns in a safe away from their children, away from where it could be easily reached for, to perform the greatest of sins. Whether that gun is turned upon themselves or another, a sin has been committed – a sad and irrevocable sin.

But then what good are guns for protection? The fact is, an assault rifle will not protect you. Any murderer, thief or kidnapper will not wait while a householder retrieves their weapon. They would simply shoot – and the laxity of American gun laws mean that they will shoot– before a defensive finger has so much as brushed the barrel. What American gun lovers mean when they put forth this argument is just that: they love guns. And, ordinarily, it is perfectly acceptable to keep something because it brings you pleasure. But people are dying.

The laxity of America’s gun laws date back to the American constitution of 1791. It’s outdated. No longer do they have to worry about fending off British red-coats or Native Americans. Now, the weaponry they use will kill regular civilians. Unlike muskets, assault rifles and handguns can shoot multiple rounds within a matter of seconds. That could mean ten people dead in a matter of seconds.
​
The right to possess firearms – for any adult to own a killing machine – is outdated. America should change it.