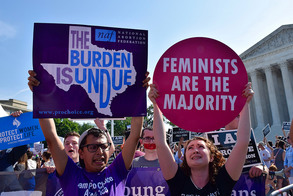 What is feminism? Is it a dead horse, being flogged by the women of the western world who haven’t realised equality is already theirs? Is it a thinly-veiled attack on males? Or is it a word with an ever-changing definition - depending on the intents of the speaker?

The short answer to all of these questions: no. The long answer: it depends. The Oxford English Dictionary describes feminism as “The advocacy of women's rights on the ground of the equality of the sexes.” Too many people - primarily men - view feminism as just the first section of its true definition. However, as a male myself, I disagree with this notion.

This misconception is mainly due to the fact that the word ‘feminism’ is merely the word ‘feminine’ with affixation of ‘-ism’, thus implying the term is directly linked to women. Which is true, but not to the extent that many believe. Those who won’t take the time to research the true definition of the word simply believe that feminism is all about the domination of society by females - or at least an attempt to turn the earth into a matriarchy.

But that is neither the aim of feminism, nor the meaning. Although invented in the onset of suffragism, the word has long since outgrown its use by purely females. Feminism is not gender-specific – it allows members of each gender to define themselves their way, not the way society tells them to be because of their bodies.

Traditionally, a man was supposed to have a stiff upper lip, rarely showing his emotions, with the responsibility of being the family provider. Feminism means that the father or husband in a family doesn’t have to be the provider of food, money and welfare. Feminism means that he can now express his emotions, be a stay at home father or do what tradition dictates he does - only this time, it is by his choice, not anyone else’s. Feminism means that the mother or wife can work all day at a senior position, provide the family with everything that a father could or she can do what tradition dictated that she do - again, though, this is her choice, not tradition's.

If everyone was aware of the true meaning of feminism, I am certain that the majority of people would say they are a feminist - although some will always cling to their traditionalistic and prejudiced practices, because it is in their nature. Before the 2015 General Election in this country, both Ed Miliband and Nick Clegg - Labour party leader and Liberal Democrat Leader respectively - wore a t-shirt for the magazine Elle which states ‘This is what a feminist looks like’ . Ex-Prime Minister David Cameron, however, refused to wear the t-shirt.

He was later interviewed on his reasoning for abstaining from whether or not he was a feminist, while other world leaders, such as Canadian Prime minister Justin Trudeau who said ‘I am going to keep saying loud and clear that I am a feminist until it is met with a shrug”, had openly admitted that they are feminists. Cameron responded that he believed in equality for women, but would not say he was a feminist until he had made this clear.

The reason for this is the fact that too many people view feminism as angry and intimidating. It is a misused term by both men and women, and the route of this misuse is the misunderstanding of the definition. This could be fixed by replacing the name with another, for feminism is too close to the word ‘female’ for a lot of people. However, we should surely as a generation be able to look past the word, and focus more heavily on the meaning. If we were going to change the word, however, we may consider ‘egalitarianism’. The Oxford English Dictionary defines this as “Believing in or based on the principle that all people are equal and deserve equal rights and opportunities”. But of course, it’s already used, quite rightly, to encompass wider issues than simple gender equality – so can it do the job as well as the word ‘feminism’?

The name should not be our primary interest. We should concern ourselves primarily with spreading the message that feminism is about the ‘equality of the sexes’, and, what with the mistreatment of women over the course of history – and the continued barriers, challenges and violence faced by women in countries across the world, the word feminism serves as an important reminder of what still needs to be addressed and what cannot and must not be ignored.

Create your own unique website with customizable templates.
Photo used under Creative Commons from jordanuhl7
UA-121891675-1