The trouble with producing energy... 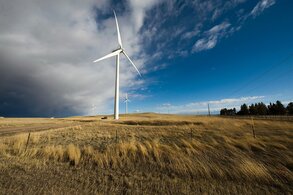 Renewable energy is widely seen as one of the key ways to reduce carbon emissions and slow climate change, but James French argues that solar power and wind turbines have their downsides.

At the beginning of October, it was announced that renewable energy had provided more energy in the UK than fossil fuels for the first time ever. This is evidently a positive step forward, but it masks some real problems with the efficiency and impact of these renewable technologies.

Let’s start with solar. Solar can be a very good source of energy, if you are talking about a portable phone charger or some other small scale production. Large scale solar energy is more difficult though. The efficiency is disappointing, 15-18% in good sunlight typically, making it one of the least efficient forms of energy production. While panels on rooftops do not require additional land, solar farms do, leading to the clearing of green land and disruption of wildlife. It is problematic to store the power drawn from sunny days, as we do not have technology advanced enough to store significant amounts in batteries. Even Tesla doesn’t have a battery store big enough to power a small city for a few minutes. Solar panels also use toxic chemicals as part of their construction; chemicals such as lead, cadmium and gallium, which means that although the energy they produce is emission free, dealing with the waste produced by decommissioned panels is a huge concern. They cannot easily be recycled and if they were put into landfill, chemicals could leak out into the soil, polluting water supplies and potentially causing harm to wildlife. This is one of the points that leads the pro-nuclear power environmentalists behind the lobby group Environmental Progress to claim that solar power is 300 times more toxic per unit of energy than nuclear.

Wind turbines have issues too. The carbon footprint for building turbines is large but does pay itself off in 5 months, which is pretty impressive. Wind is not consistent though, which makes it an unreliable source of energy. The average UK wind speed as of last year was 8.5 knots (4.4 metres per second). According to the European Wind Energy Association, wind turbines start working at around 4-5 metres per second and work optimally at 15, they shut down in gale force winds or storms. So, most of the time, wind turbines are hardly producing any energy. There are also issues with transporting the electricity from offshore farms to areas of high population. Because of this, the 24% “Theoretical maximum output” (41% for offshore) is even lower due to transporting it miles and miles to actually get to more people (according to EWEA).

A further ecological nightmare that you may not be aware of; these giant windmills practically act as bird blenders, killing tons of flying creatures. Estimates of the damage done to bird and bat populations ranges from about 100,000 estimated deaths in the UK per year to wilder studies suggesting up to 18 million bird deaths in Spain. However it is worth setting this against the millions of birds and bats killed annually by cars on the road, the estimated 30 million that die from flying into windows or buildings in the UK alone (British Trust for Ornithology) and the staggering estimated 27 million birds who die annually in the UK at the paws of the domestic cat.

Is there a cleaner solution? One answer is nuclear. No matter how controversial it is, it does have environmental benefits. While typical solar efficiency is 15-18% and wind efficiency is at 24% (according to TheEcoExperts), conventional Nuclear rests at 91% efficient. Nuclear energy is also the safest, causing the least amount of casualties per Kilowatt Hour.
​
Nuclear energy is also a land effective energy source, making up to 360 times the power per km squared than a wind farm and up to 75 times the power the per km squared that a solar farm does. Nuclear energy, while seeming to bellow out smoke, does not produce any carbon emissions. The “smoke” seen from the towers is water, evaporated as it cools the reactors.
The problem, of course, is nuclear waste, which cannot be overlooked as an issue as the material produced remains toxic for centuries, but storage and further use of the radioactive material could be improved. Countries could potentially recycle decommissioned nuclear warhead fuel into reactors, though a counter argument may be that countries might also use materials intended for nuclear power to aid nuclear weapon development.
While nuclear is portrayed as a very scary and daunting type of energy that has taken thousands of lives - for example in the Chernobyl disaster -  these are rare individual disasters that have been caused by natural events or poor management. The question is whether human beings can work to ensure that future poor management or natural calamities can be avoided or neutralised to ensure no harm is done to humans or the environment. If the nuclear scientists can get it right, then nuclear power, as an efficient, carbon neutral energy source could possibly be the way to save our planet from climate change.