The tide's coming in: how long can our oceans survive? 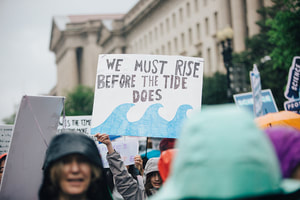 Our planet is dying.

Whether from your environmentalist uncle or the mainstream media, words like these are becoming a part of our lives. Particularly in trouble are our oceans. The ocean is one of the most important components of our planet: it is a source of food and a habitat, among other things. In 2016 and 2017 there were two Great Barrier Reef bleaching events. This is where coral loses is distinct bright colour and turns “bleached” . All of this is because of rising temperatures caused by global warming - global warming caused by us. Rising water temperatures are a huge problem, as when they don’t drop back the coral die. This has happened twice in two years and if this doesn’t change we are at a huge risk of losing one of the biggest coral reefs in the world.

Many people don’t think twice about how they are affecting our oceans. We are all guilty of taking the extra trip in the car when we could have walked, or not turning the lights off when we leave our homes. However, all of this is taking a toll on our planet. Sea creatures are in serious danger from both rising sea levels and temperatures. The sea turtle population has dropped an average of 5.9 percent each year since 1984. If our world continues to be polluted, this steep decrease could continue until the whole population has gone. It isn’t just leaving the lights on that is killing our planet. It’s our deliberate actions. Tossing rubbish into the sea such as beer holders or plastic bags can kill animals such as turtles. Pollution in our oceans is around 80 percent due to waste being deposited into the ocean. Plastic debris like bottles or bags does not decay; instead it ends up in an animal’s stomach.

The big question is: how do we change this? Well the answer to that is simple. Don’t pollute . This may seem hard, but it’s the simple things that make a difference. Taking public transport instead of individual cars can change the amount of carbon dioxide released into our atmosphere. One vehicle carrying 32 people is better than eight cars each carrying four people. Recycling is so important . No matter how in effective it may seem it is always making a difference, because that plastic water bottle can be reused as something else. It can take hundreds of years for plastics to biodegrade and in that time it would have polluted our seas - one bottle at a time .

It’s about time we look after our oceans before it’s too late. By doing simple things you can make a huge difference to how our earth is treated. These things are vital to both our lives and future generations.

Create your own unique website with customizable templates.
Photo used under Creative Commons from mollyktadams
UA-121891675-1