The cold reality of spending Christmas on the streets 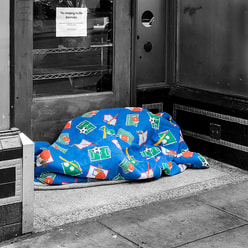 A short story about homelessness during the festive period.

Everyone loves roast dinners, with gravy and meat and vegetables. But when you’re sat down around the table, with your family’s beaming faces around you, do you ever stop and think of those who don’t have family, dinner or a roof over their heads? This is a story about someone called Rachel. She was tucking into her roast dinner when she started to think about this.

Somewhere on the streets nearby, there was someone shivering under a thin blanket. They had a bag next to them. It was full of things they would need to survive out on the busy street of London. Every day, they had to put up with the hustle and bustle of the manic street. There were yellow taxis and lots of important-looking men and women walking quickly along trying to get out of the rain. Right now, all that the person wanted was to be in a nice dry warm house feasting upon a roast dinner. That was all that they wanted. They were freezing, as it was now November. And they were starting to worry, as somebody had dropped the paper from that morning. It had said on the front page that there was going to be extreme weather, and a possible chance of snow on Christmas Eve.

Snow is great. You can build snowmen and have snowball fights. You can go sledging and then you can come inside. You can get your pyjamas on and get cosy with a hot chocolate in front of the TV. But if you don’t have a home, snow is your number-one enemy. You and all your things get covered in it, and it's freezing. If you’re living on the streets, you hate snow.

Rachel felt so sorry for all of the homeless people in the world at this moment. It wasn’t snowing, but it was freezing outside. She grabbed her coat and boots and asked her mum to drive her into town. They got to town and Rachel saw someone without a home. Her mum parked near the man and her and Rachel got out of the car. Together they walked over towards him. “Hello,” said Rachel softly, as she didn’t want to disturb him. “My name is Rachel.” Once again, she had no reply - but, suddenly, she had an idea.

She and her mum got back into the car and headed to the shops. She got a blanket, some food, a drink and some tokens and vouchers for various different shops. There was a voucher for a clothes shop. There were also some for food. Even though Rachel hadn’t provided this person with a home she still felt goodness seep out of her small beating heart. It was the best feeling. The feeling of kindness. Rachel waited until Christmas to give these. She felt sure that this person had never received any gifts before at Christmas. She wanted everyone to have experience of such a wonderful event such as Christmas.

...
​
It was Christmas Eve. The Christmas tree stood gleaming in the corner of the lounge. Everything was perfect. Tomorrow Rachel would give someone who was in need of help a gift. The family was coming over and this was the best Christmas that this little girl had ever experienced. She switched on the TV and the news was on. It was breaking news. There was going to be extreme snow overnight and on Christmas. It was going to be really deep. Rachel was so pleased; the snow had come at a perfect time of year. But Rachel’s joy soon turned into dismay. What about the person without a home?

It was finally Christmas! After a special breakfast and having opened all of her presents, Rachel and her mum went to the man on the streets and left the presents next to him. Rachel tucked in a card which had their address in, and went off with her mum.

It was almost Christmas lunch, and Rachel was worried that the person hadn’t got the gifts. Suddenly there was a knock at the door. Rachel went to it and opened it. There was a man at the door, and he began to speak. “Hello,” he said “Are you the one who gave me those gifts?” He spoke in a low but soft voice.

“Yes,” she replied. Her mum appeared at the door, and the minute she did, Rachel said, “Mum this is the man I helped. Can he have Christmas dinner with us please?” Her mum was so pleased with her daughter that she replied, “Yes of course he can.”
Rachel shut the old wooden door behind and followed everyone in to the table.

Everyone loves Christmas dinner, with gravy and turkey and vegetables. But when you’re sat down around the table, with your family’s beaming faces around you, do you ever stop and think of those who don’t have family, dinner or a roof over their heads? This story is about someone called Rachel. She thought of this and helped someone.