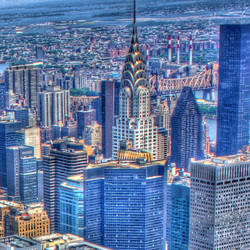 Heathfield students hit the Big Apple in April and adored it. The trip was a roaring success and everyone came home buzzing about it. Here is one student's account of the visit.

On April 7th students from year 10, 11 and year 12, travelled to New York for a Business, ICT and Economics trip. We stayed in at hotel called‘The Days Inn, Broadway.’ It was located on 94th Street which was a 10 minute walk from Central Park. The first day involved us arriving
at Newark Airport, New Jersey, having a bumpy experience whilst travelling to the hotel.
The first thing we did was walk through Central Park and then it started to rain. We weren’t able to see much of Central Park because it started raining heavily. We then decided to run and hide in the Apple Store on 5th Avenue to get out of the rain. After the Apple store it was time for our first meal in New York. We went to an ‘all you can eat’ buffet restaurant called ‘Sbarro’. We were welcomed in by one of the staff members who was interested in hearing all about our trip and where we were from. Once we had all finished our meal we continued onto Times Square where we got to take photos of all the lights and all the different shops. We then took the subway back to 94th Street and that was the end of our first day in New York.


On the second day we visited the 9/11 memorial site. Once we had been searched for security reasons we were led to the area where the Twin Towers
once stood. There are giant square craters in the ground marking where the buildings once stood, with names of all the people that died engraved on them.
After about an hour there we moved on and walked towards the Financial District. We had a tour of the Museum Of Finance which was interesting, where we learnt all about America’s huge debt. As the weather had finally changed for the better, we made our way through the Financial District. We managed to grab a
‘Subway’ and then headed for the Staten Island Ferry for the Statue of Liberty.
There was a crowd gathering by the entrance to the ferry and we all piled on. The ferry had seats all the way around it allowing you to look out of the windows and see New York’s cityscape and it wasn’t long before we travelled past the Statue of Liberty.
For our meal in the evening we took the subway to a Restaurant next to Planet Hollywood in Times Square. After our meal we made our way to Madison Square Gardens to watch New York Rangers Ice Hockey Team v Carolina Hurricanes. The atmosphere was brilliant and we were surrounded by hard core
Ice Hockey fans. Even though our seats were near the stop of the stand we had a brilliant view of the game and luckily they won 4-1.
I would say the third day was the best day. We started off our day in the café round the corner from our hotel that we visited each morning and had breakfast in there. Once again we took the subway and we visited the Empire State Building. We entered the building and were searched like you would be in an airport and had to go through lots of security. Once we had managed to get through we got into lifts that took us to the 80thfloor of the Empire State. We walked out of the lift and were immediately amazed with the view of New York City, as you could see for miles. After spending about 45 minutes
taking photos, we were given the opportunity to travel even higher up to the 102nd floor of the building. The only catch was that you had to pay an extra $17. Quite a few people didn’t go, but about 8 of us did. We crammed into and even smaller lift and were then taken to the 102nd floor and the view was even more amazing.  You could actually feel the building sway a little bit. Once again we took more photos and then met the others back down at the bottom of the building. We then walked to Macy’s which is the world’s largest store in terms of square feet. In total it had 12 floors but only 9 of them were used for shopping. We had a tour around the building and were then allowed to go and have a look around.
Once we had finished in Macy’s we made our way to Madison Square Gardens and had a full access tour of the arena and learnt all about it. After our tour of the arena we made our way to Grand Central Station and wondered around there for the rest of the evening. For our meal we went to a Mexican restaurant located in Times Square and had our last meal in New York.
For the fourth and final day we visited Radio City Theatre. Once again we had a tour of the building and got to meet a Rockette Dancer. Once we had finished our tour of Radio City we headed to the Rockefeller centre. We were then given the chance to go off for a while to go wherever we wanted. We got to
explore a bit more of New York; we also went in lots of shops to get souvenirs and other gifts. The weather on the last day was about 20 degrees so we decided to just sit in the sun and soak up the atmosphere before we left for the airport to go home. A fantastic trip and thank you to Mr Perkins for organising
it!