Horsing around at Plumpton: a Sussex race day to remember 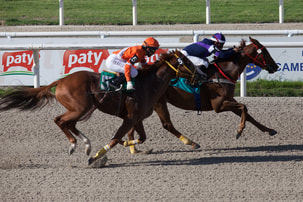 On Sunday 6 January, one of the most memorable fixtures for the East Sussex racing venue took place. This year, Plumpton received increased media coverage on the new channel Sky Sports Racing. It produced extensive coverage of the day, including the ‘slow mo’ camera across the finish line, fantastic HD viewing and drone coverage of the races across the South Downs. This unique vantage point was one to savour.

The day began with the intriguing ‘Novices’ Hurdle’ race, in which 13 out of the 72 runners competed. During the two-mile event, two horses broke clear in the early stages and maintained their position until Brandon Castle became the winner.

The second race was nicknamed the ‘Plumpton Arkle’, and a stunning six racers took part. The battle was left between Knocknanuss, the local raider for Sussex, and Master Dino, the French favourite and champion. The latter showed his class by jumping foot perfect, and won international success at Plumpton, proving the journey from France worthwhile. However, the horse picked up a small injury - though it has been treated, he will be unlikely to run again this season.

Then came the feature. It was the first ever race sponsored by Sky Sports Racing: stamina was required for the three and a half miles and the 20 fences that had to be negotiated. The Two Amigos powered on to take gold, proving a big success for trainer Nicky Martin and jockey Matt Griffiths.

The Bowen family regularly make the trip from West Wales, and at Plumpton they took the two-mile, three-furlong handicap chase, with Alf ‘N’ Dor travelling superbly well and managing to beat the locals to second and third place.

The finale on Sussex National day went to another favourite: First Quest bolted up for a quick performance, finishing very strongly.

All in all, it was an excellent day of horse racing at Plumpton, and all hard work paid off. Over 2,200 racegoers enjoyed a day out in the sun, watching races to remember over the hills of Sussex.

Create your own unique website with customizable templates.
Photo used under Creative Commons from jikatu
UA-121891675-1