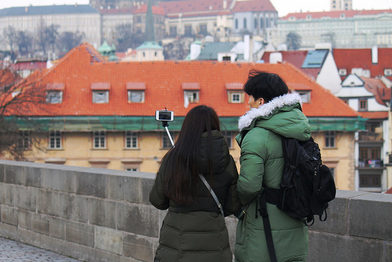 Selfie-sticks: the new phenomenon that has spread at an alarmingly viral rate across the world; the metre-long, steel pole that enables you to make your fragile phone airborne and in danger just for the sake of a good selfie and a potential profile update.

It is pretty clear that selfie-sticks are just another way in which people, young and old, try to compete in the ‘how much of a good time am I having?’ game that dominates social media. Whether or not people are aware of this passive-aggressive game that they are feeding with their pictures is a dubious matter, but it’s probably fair to say that most people know at some level that it’s going on.

The need in this technological age to look good and have appealing social lives is over-mastering. But look again at all the times you posted a good night out on Instagram – did you really engage in the night, or were you merely a paparazzi-like observer at the side lines, too busy ‘documenting’ it to actually throw yourself into the action?

The oppressive vanity of the Internet is a source of constant fascination – but also considerable potential harm. Young, impressionable people are forced to feel like outcasts if they are not up to speed with the newest apps and technologies, never mind the pressure to make sure their appearance fits. Everything is out there for public consumption – or public mockery – and young people, at their most vulnerable as they develop their identities in their teens, are arguably the biggest victims.

Did you know that more young girls and boys are suffering from eating disorders and depression than ever? There is no doubt that this is connected to the upsurge in social media and the compulsive behaviours – whether constantly taking photos or constantly craving likes and retweets – that go with it.

Those who don’t conform to society’s narrow view of ‘perfection’ feel oppressed and rejected – and inevitably take it out on themselves.

It’s not that the Internet is no good. The Internet is an amazing tool, offering almost unlimited knowledge at your fingertips, but perhaps we should all take a step back and think before we break out the selfie-sticks. Are we actually preserving memories, or simply desperately trying to conform to the demands of a society that will always make you feel like you’re not quite good enough?

We need to look at the bigger picture before posting the latest snap saying ‘What a night!’ just to make someone jealous or to prove to your family that you do have a life. One photo, one passive-aggressive comment in the wrong direction, could easily send out a ripple of negativity with serious effects for other people.

So think before you reach for your stick. And think before you post your picture. Posting for fun might be fine, but posting to prove a point is something much sharper – and if it hits the mark, it can hurt.

As for the night out itself: stop worrying about how it looks – or how it’s going to look in the pictures – put your phone down and just let yourself enjoy it.

Create your own unique website with customizable templates.
Photo used under Creative Commons from elPadawan
UA-121891675-1